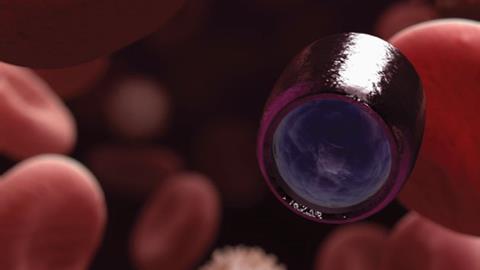 Nanoparticles that can find specific targets before delivering a drug could change medicine. Akshat Rathi looks at whether sci-fi could become fact

Eric Drexler may get the credit for popularising the idea of nanotechnology in his books of the 1980s, but chemists have been dreaming of manipulating molecules to do their bidding ever since they found out that all matter is made of atoms. While Drexler’s self-assembling molecular machines may remain a dream, in the last decade chemists have already achieved a more practical version of that dream. Nanoparticles have found use in manufacturing, materials, energy, electronics and medicine.

Though not quite machines, these nanoparticles have found such diverse applications in a short time because of their ability to do what the simple materials of the 20th century cannot. Nathan Gianneschi of the University of California, San Diego, in the US has been toying with nanoparticles throughout his academic career, hoping to find applications in medicine. ‘Most materials we use today are static, but those can do relatively little inside the body,’ he says. ‘What we really need is materials that can sense and adapt.’

For materials to do what Gianneschi and others envision, they have to be structurally very different from traditional materials. And in that sense, a bunch of nanoparticles floating in a fluid may not seem much like a material. But as an ensemble, the function they perform is just like that of a traditional material. They provide a platform, albeit a flexible and responsive one, that can be modified to address 21st century problems.

Samir Mitragotri at the University of California, Santa Barbara, in the US is one of the leading researchers in the use of nanoparticles in drug delivery. ‘The idea of using nanoparticles for multiple functions at one time is fascinating,’ he says. What Mitragotri is hinting at is the emerging field of nanoparticles as ‘theranostics’, a combination of therapeutics and diagnostics. The idea is to use nanoparticles not just to seek and image where disease occurs in the body, but also to treat the disease locally immediately after it has been located using the same agents.

There are, however, a number of things that need to be in place for theranostics to work. First, to be able to diagnose the disease, the researchers need to be able to determine a biomarker specific to that disease. Second, they need to build a ligand that will effectively bind to this biomarker. Third, the nanoparticles need to integrate the diagnostic ligand, the imaging properties needed to reveal successful diagnosis and the therapeutic agent (or property). Fourth, the therapeutic agent or property needs to remain inactive during the ‘seeking phase’ and only be activated once diagnosis is successful.

Fortunately, medicinal chemists have been working on the first two steps for many years, so there plenty of tools available. Take ibritumomab tiuxetan (sold under the name of Zevalin), for example: this molecule consists of two parts. One is a monoclonal antibody that binds to the CD20 antigen which is found on B cells of the immune system. The other part consists of a radionuclide of either yttrium-90 or indium-111 which, when attached to B cells, kills the tumour cells that the B cells locate. The presence of a radionuclide makes it possible to track these molecules, using positron emission tomography, as they perform their duties.

Zevalin avoids the difficulties of steps three and four, but few theranostics do. ‘Understanding complex materials such as nanoparticles in a complex environment such as human blood is extremely difficult,’ says Kytai Nguyen of the University of Texas, Arlington, in the US, who has been working on theranostics development. Fortunately, though, the past decade has seen an explosion of activity to address the latter steps.

Iron oxide nanoparticles can be loaded with drugs and heated through an applied mangnetic field, releasing a drug

Nguyen’s lab has worked on converting iron oxide nanoparticles, which were first developed as contrast agents for magnetic resonance imaging (MRI), into theranostics. The nanoparticles are first covered in a layer of drug, then coated with a polymer that melts when heated. Finally, a ligand is attached to the polymer so it can bind specifically to prostate cancer biomarkers.1

Thanks to their iron oxide core, the nanoparticles can be tracked with MRI once inside the body. After the ligand helps the nanoparticles locate and accumulate in the tumour, they can be heated using a rapidly alternating external magnetic field. This heats up the iron oxide particles from the inside and forces the polymer to melt, slowly releasing the drug locally.

Another example is MMP2NP-GNR. The rather unattractive acronym stands for gold nanorods (GNR) that can be activated by the enzyme matrix metalloprotease-2 (MMP), which is overexpressed in tumour cells during growth, progression and spread.2 Yongdoo Choi of the National Cancer Centre in Korea developed these gold nanorods, which on activation produce reactive oxygen species that cause havoc in tumour cells. All this can even be tracked via near-infrared fluorescence imaging.

All nanoparticles in the body, not just theranostics, have to fight another battle. ‘The body’s immune system makes sure that nanoparticles are removed from the bloodstream soon,’ says Mitragotri. Macrophages produced by the immune system recognise these nanoparticles as foreign bodies in the bloodstream and then consume them. The liver and the spleen are particularly good at doing this because of a high population of fixed macrophages. ‘At best, each nanoparticle gets a single shot at binding to a target – only the first step in the life a theranostic – before being removed’ he says.

This is why binding agents need to be not just highly specific, but also highly effective. One way to work around this problem has been through attaching polyethylene glycol (PEG) molecules to the nanoparticle to mask it from the body’s immune system – known as ‘pegylation’. ‘Different kinds of PEGs and in different densities have been effective at letting nanoparticles linger in the body a little bit longer,’ says Mitragotri.

Nature has made use of shape to perform interesting functions

Earlier this year, Dennis Discher at the University of Pennsylvania in the US found an even more effective way of masking nanoparticles from the immune system.3 He and his colleagues used a protein called CD-47 that macrophages treat as a ‘molecular passport’ to recognise human cells over foreign ones. When attached to nanoparticles, CD-47 allows them to get past the macrophages, which now recognise them as their own, and linger in the bloodstream for much longer than simple pegylation.

Mitragotri has been trying to find different ways to increase the efficiency of binding nanoparticles. ‘Nature has made use of shape to perform interesting functions. Biological cells aren’t spherical in shape or inflexible, but most nanoparticles are,’ said Mitragotri.

In February this year, Mitragotri reported that his rod-shaped particles, which were identical to spherical nanoparticles in every other way (volume, material, ligand etc), were more effective in binding to breast cancer biomarkers.4 ‘Rod-shaped particles have fewer degrees of freedom and longer sides, which in combination helps them to engage more efficiently with breast cancer targets,’ said Mitragotri. He is confident that other targets will show similar results to different nanoparticle shapes. 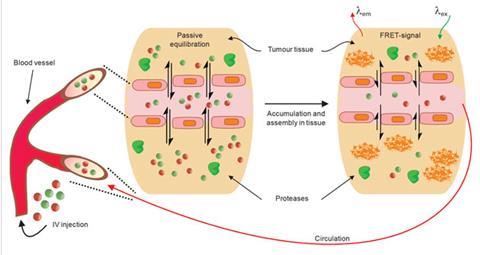 Gianneschi is pushing for new methods of activating theranostics. His nanoparticles perform their dual roles of diagnosis and treatment by switching shape.5 The switching is enabled by MMPs, the same enzymes targeted by Choi. What Gianneschi did was to install chemical groups on nanoparticles that mimicked the matrix that MMPs consume.

When injected in the blood stream, these nanoparticles, made from detergent-type molecules containing a long aliphatic chain with a hydrophilic head, are spherical in shape. They form this shape to minimise water repulsion by exposing their hydrophilic heads and hiding their hydrophobic chains. Next, because of their in-built affinity for MMPs, they accumulate close to cancer cells. Here MMPs destroy chemical groups that are meant to act as bait, forcing the nanoparticles to break open and then rearrange to minimise water repulsion. The rearrangement has been programmed such that it forces the nanoparticles to form a network on top of the tumour.

Here, when tagged with dyes, they can sit for almost a week, helping doctors to understand the precise extent to which the tumour has spread and act accordingly. ‘We are working on covalently bonding small drug molecules to the core of these nanoparticles, which would mean that, while travelling to the disease site, the drug remains protected inside the sphere,’ Gianneschi says. ‘On rearranging, caused by MMP consumption, the drug can be slowly released directly on site to treat cancer.’

The kind of work done by Gianneschi, Mitragotri, Nguyen, Choi and Discher is part of a developing trend. The past decade has seen great progress in nanotechnology because of advances in nanofabrication, making the use of nanoparticles routine in research laboratories around the world. Another reason may be that it is part of the future direction for medical research through ‘personalised medicine’. The heterogenous nature of certain diseases like cancer means that the next step in better treatment will come as much from better targeting and delivery as from development of new drugs.

The specificity offered by theranostics, with increasing knowledge about unique biomarkers, makes it an exciting prospect for personalised medicine.6 The hope is that mapping every human gene to a function will help determine which biomarkers should be expressed by a disease in every individual. Using this knowledge, nanoparticles could be custom built using parts much like Lego blocks and delivered to the patient for personalised treatment.

But Lin Wu, senior director at Roche Diagnostics, has warned of the hurdles in the way of this dream.7 First, the economic challenges are too large for a culture built around the search for blockbuster drugs. Second, the regulatory authorities treat therapeutics and diagnostics very differently. Drugs may take 10 to 15 years for approval, but diagnostics take only a third of that time.

Despite the difficulties, the direction of progress cannot be in doubt. ‘Traditional drugs take a scatter shot approach to therapy. We now need precise ways of solving biological problems,’ says Gianneschi. ‘The use of nanoparticles in theranostics is definitely one such precise way.’

Drexler’s dream may have been criticised as impossible, but his vision was a bold one. Whatever the critics may say, researchers around the world have definitely taken inspiration from it.

Akshat Rathi is a science writer based in London, UK