Graham Richards, former head of chemistry at the University of Oxford, shares some of the lessons learned from spinning out companies based on good novel chemistry

Graham Richards, former head of chemistry at the University of Oxford, shares some of the lessons learned from spinning out companies based on good novel chemistry

One of the few attractive options for helping countries out of the current economic downturn is the development of new companies and industries from university research. In the UK, this extra emphasis can only accelerate what was already becoming a significant trend: the creation of spin-out companies based on university intellectual property. The government clearly recognises this with Lord Drayson recently increasing the University Seed Fund from ?250,000 to ?500,000, and even the Royal Society setting up an enterprise fund to make investments in early-stage businesses. 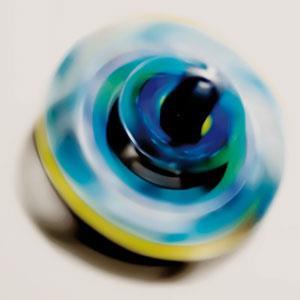 Teaching and research must remain the most important functions of universities, but the attitude towards commercialisation has changed dramatically over the past 20 years. My recent book on spin-out companies is dedicated to Margaret Thatcher because she was responsible for two innovations which led to the change of attitude and practice in the UK. Firstly she changed the tax regime so as to introduce venture capital to the country in the early 1980s, but more importantly in 1987 she gave the ownership of intellectual property derived from government-sponsored research in academia to the universities, providing they set up mechanisms to facilitate their exploitation. This followed the failure to patent monoclonal antibodies by the responsible agency, the British Technology Group (BTG) - which had itself been set up following the non-patenting of the UK inventions of radar, the jet engine and penicillin, albeit for strategic military reasons during the war, but at a commercial loss of hundreds of billions of pounds to the country.

Of all disciplines, chemistry has proved to be the most fruitful in terms of the founding of spin-out companies, perhaps because the subject spans areas from physical science through to biology. At the University of Oxford, 14 companies have emerged from the chemistry department over the past 20 years (see box). Of these spin-outs, five have become public companies, four of the latter remaining on the alternative investment market (AIM), while one had a full London stock exchange listing.

When the companies are first formed there has to be an agreement on the relative equity, or shares, to be held by the three relevant parties: the funders who provide the essential cash to get the business going; the university, which contributes the intellectual property, usually as a licence; and thirdly the academic or academics whose involvement is essential for the company to succeed. The only rule is that the respective share holdings must add up to 100 per cent - surprisingly, not all academics appreciate this and often over-value their contribution. Typically the split would be 40 per cent for the funders, 10 per cent retained for the management, and 25 per cent each to the university and to the academics.

One firm lesson learned from the Oxford experience is that things work best if the leading academic remains in the university doing his or her normal job, but perhaps acts as a non-executive director or chairs the international scientific advisory panel. More often it is the post-doctoral researchers who actually join the start-up company in technical roles.

Oxford has probably produced more companies than most universities because of the existence of IP Group, which grew out of the deal struck by the chemistry department with the then London stockbrokers, Beeson Gregory, to help fund their new ?64 million research laboratory (which was built at zero cost to the university). A significant portion of the funds for that building came from the deal, whereby for a fixed sum of money upfront, the company received half of the university equity in chemistry spin-outs. This deal led Beeson Gregory to found a new company, initially known as IP2IPO and later as IP Group, which is listed on the London stock exchange and now has partnerships with some 10 UK universities and activity in continental Europe too. What it can provide is help in setting up spin-out companies, sources of management and above all access to funding.

Although quite often start-up companies begin inside academic departments, things seem to progress much faster if as soon as possible they move out to industrial sites, albeit remaining close enough to the university to maintain collaborations. Very often the new companies can provide research funds to their former laboratories - as in the case of Oxford Nanopore (see Chemistry World, June 2009, p56) - and this potential benefit should be added to the simple financial return.

Three things are essential for the success of a spin-out company. These are: some good novel and protected science; suitable management; and sufficient start-up funds. Over the last few years it has usually been one of these facets which has caused a problem for emerging companies. Initially there were difficulties in finding suitable pieces of scientific work, but this is now the least of the problems. What is more, universities are now much more professional in protecting inventions by means of patents than was formerly the case, while at the same time avoiding significant delays in open publication. The importance of patents to spin-out companies cannot be overstressed.

Much more troublesome has been the sourcing of appropriate management, especially chief executive officers (CEOs), who need to understand the science, but above all need to be able to present to potential investors. Best of all is to find an individual who has done this before, but this has not always been possible because it took a number of years for a pool of such people to emerge. One positive feature of the recent downsizing undertaken by some of the major pharmaceutical companies is the fact that this is providing some well trained and suitable CEOs for university spin-outs. 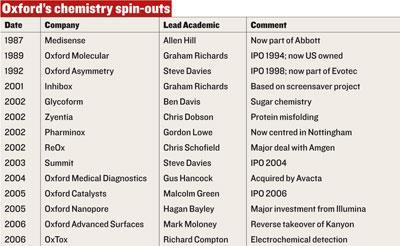 The all-important provision of finance tends to be cyclical. There was a period when this was not particularly troublesome, and business angels were keen to furnish start-up funds while venture capitalists were more prone to provide second or further rounds of funding. It was also the case that AIM provided an alternative approach - to float the company at a very early stage and to use shareholders’ funds to finance the company. Some of the Oxford chemistry companies managed to raise millions of pounds in this way long before they had a chance of becoming profitable.

Now, in the present economic gloom, things are very different. AIM has essentially shut - it is very difficult to float a new company and there is precious little liquidity or trading on that market. Some sectors seem particularly unpopular - biotechnology and especially early drug discovery companies are finding it very difficult to raise cash. IP Group has created over 70 companies, of which almost 60 remain private. Most of these are doing fine in the sense that they are sticking to their original business plans and meeting milestones, but they will require more cash. This is where the current difficulty lies. Venture capitalists are more interested in bigger companies. What cash is available seems more likely to be attracted to amalgamating small companies into more viable units or to buying companies which are in distress for very low prices.

The credit crunch has hit this world of spin-outs, but there are some optimistic signs. In particular a number of the major pharmaceutical companies have established venture funds, including Merck Serono, GlaxoSmithKline, Roche, Pfizer and Novartis. They will, however, be operating in a buyers’ market.

For the academic tempted to explore this path it must be accepted that this does involve a lot of extra work and time, but it is both rewarding and a lot of fun.