This year's Nobel prize in chemistry has highlighted the importance of surface chemistry in modern life. Richard Van Noorden catches up with the winner, Gerhard Ertl

This year’s Nobel prize in chemistry has highlighted the importance of surface chemistry in modern life. Richard Van Noorden catches up with the winner, Gerhard Ertl

’This is the best birthday present you can give to somebody,’ a delighted Gerhard Ertl told the Swedish Academy of Sciences on learning he had won the 2007 Nobel prize for chemistry on his 71st birthday. 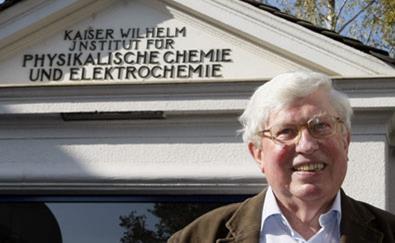 After dabbling close to the shores of biology last year, the Nobel committee returned to physical chemistry for this year’s award. Ertl took the 10 million kroner (?755,000) prize for his detailed studies into how chemical reactions take place on solid surfaces. Ertl, one of the fathers of modern surface chemistry, combines a gentle character with a deep understanding of science - qualities that have garnered him international respect and widespread friendship.

Ertl’s prize-winning research was concerned with one fundamental question: what exactly goes on when molecules from the gas phase hit a solid surface and react? The inquiry is not, perhaps, glamorous or immediately startling, but pervades a huge number of natural and artificial chemical reactions. The ammonia-forming Haber process for making fertiliser; the exhaust-cleaning catalytic converter in cars; the electronics industry’s production of semiconductor materials by chemical vapour deposition; the breakdown of ozone on ice crystals in the atmosphere; these and thousands of other reactions have surface chemistry at their core.

’Ertl really pioneered the ability to discover what was happening at surfaces on an atomic scale - essentially, the physics behind why industrial processes happen,’ says Charles Campbell, a surface chemist at the University of Washington, Seattle, US. Ertl’s rigorous cross-examining of molecules at surfaces set a benchmark for all other studies in the field: he showed it was possible to understand, and even to control, catalytic reactions.

Long before Ertl was born in 1936 in Stuttgart, chemists understood the importance of solid surfaces to catalyse reactions. In 1912, Paul Sabatier was awarded the Nobel prize for his hydrogenation of organic compounds ’in the presence of finely disintegrated metals, whereby the progress of organic chemistry has been greatly advanced in recent years’. Fritz Haber’s discovery of ammonia synthesis from nitrogen and hydrogen, using an iron catalyst, won him the 1918 Nobel prize. And in 1932, Irving Langmuir, who could lay claim to be the grandfather of modern surface chemistry, took the Nobel for his seminal studies into reactions at air-water and air-solid interfaces.

’As a young boy I was interested in chemistry and physics, but only learned of the heroes of surface chemistry later on,’ Ertl told Chemistry World. Son of a miller and a tailor, he studied physics in Stuttgart, Paris and Munich before securing as his mentor the physical chemist Heinz Gerischer. He would later succeed Gerischer as director of the department of physical chemistry at Berlin’s Fritz Haber institute, part of the Max Planck society.

In a 2002 lecture, Ertl approvingly quotes Gerischer’s 1973 description of the mysteries surrounding what happens at the surface of electrodes. It could also summarise the attitude of many chemists hoping to understand molecules reacting at surfaces: ’It is like a detective story. The kineticist knows the actors, present at the beginning, and he sees the victims. He has to search for witnesses to reconstruct the course of events.’

In the 1960s, the interrogators for these witnesses were just appearing, in the form of new methods for studying molecules on surfaces. Thanks partly to the growth of semiconductor technology, chemists were able to prepare pristine crystal surfaces in almost complete vacuum. Ultraviolet and x-ray photoelectron spectroscopy, which involve firing radiation at molecules and measuring the characteristic energies of the ejected electrons, were beginning to build up characteristic signatures of molecules injected onto a surface.

Ertl took full advantage of the new tools, first studying how hydrogen atoms were organised on metals like palladium, platinum and nickel. In the mid-1970s he moved on to look at the Haber-Bosch process, where nitrogen reacts with hydrogen to form ammonia. This industrial reaction now helps to make over 100 million tons of fertiliser a year. The commonly used catalyst consisted of a witch’s brew of iron particles, with added potassium hydroxide, on a support of alumina and silica, under pressure.

How nitrogen and hydrogen were behaving on the surface was unclear. Ertl showed that nitrogen’s strong triple bond cleaved on an iron surface so that the molecule split into atoms before meeting hydrogen. He also explained why potassium (and other alkali metals) should promote the reaction, showing that the distorted electron density between potassium and iron encourages neighbouring nitrogen molecules to break apart. In doing so, he proved that clean, high-vacuum studies were relevant to the commercial industrial process - a reality that some chemists were struggling to believe.

A similarly memorable and thorough analysis began in the 1980s, when Ertl tackled the more complicated oxidation of carbon monoxide on platinum (the reaction that is the basis of a car’s catalytic converter). The reactions here were more complicated, and Ertl showed that carbon monoxide and oxygen molecules writhed in oscillatory waves over the platinum surface during the reaction, as surfaces reconstructed and incoming molecules changed the balance of electron density.

Ertl’s elegant experiments relied strongly on combining the right methods for studying molecular behaviour, and he was quick to pick up on whatever was available. Gerischer supplied him with the first commercial low-energy electron diffraction (LEED) microscope in Germany; while in the 1980s he was one of the first to recognise the potential of the scanning tunnelling microscope, perfected by 1986 physics Nobel prize winners Gerd Binnig and Heinrich Rohrer.

’Progress either needs new ideas (which are rare) or new techniques. We had the techniques,’ he says modestly. But, as compatriot Ferdi Sch?th, now at the Max Planck Institute of Coal Research, Mulheim, points out, ’If Ertl needs a technique and there isn’t one available, then he invents it.’ Sch?th highlights the development of dynamic LEED - monitoring how diffraction spots move as a surface chemical reaction proceeds - while Ertl is proud of his adoption of photoemission electron microscopy (PEEM) and tip-enhanced Raman spectroscopy.

Throughout this interplay of technology and fundamental science, Ertl displayed ’a unique ability to distil out of a complex problem the essential simple questions,’ as his Fritz Haber Institute colleague Hans Freund puts it. Ertl’s methodology - showing how to use a formidable set of tools to be certain of an answer - has influenced many surface scientists. He has ’an uncanny insight into the central issues at work in surface chemistry,’ according to John Yates, a surface chemist at the University of Virginia, US.

Ertl is also a renowned teacher, and has left a legacy of scientists well-trained in surface chemistry. ’He is very inspiring for all students - a very generous person: gentle, friendly, and sympathetic,’ says Sch?th. John Vickerman, of the University of Manchester, who worked in Ertl’s group in Munich for a year in 1979, remembers how he invited colleagues to musical soirees; Ertl is a keen pianist, fond of Mozart and Bach, and enjoys German literature.

While the surface science community praises Ertl’s achievements, some are surprised that other eminent surface chemists missed out on a share of the prize. ’All the main names of the field were considered,’ Nobel prize committee member Anders Liljas told Chemistry World, but ’it was felt most appropriate to give the award to one single person’. 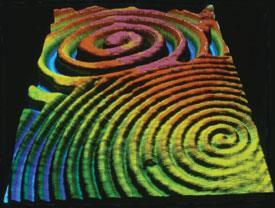 University of California, Berkeley, chemist Gabor Somorjai, who praised Ertl’s Nobel as ’well deserved - he is a good colleague and a good friend’, was mentioned by many chemists contacted by Chemistry World  as equally deserving of the award. Somorjai and Ertl shared the prestigious Wolf prize in Chemistry in 1998, while Somorjai has recently been awarded the 2008 Priestley Medal by the American Chemical Society (ACS). Francisco Zaera, at University of California, Riverside, has commented of the Priestley award that ’Somorjai could be considered the father of modern surface chemistry, and to have almost single-handedly set the molecular foundations of heterogeneous catalysis’. David King, of the University of Cambridge, UK, was another potential Nobel candidate, some surface scientists suggested.

Nonetheless, chemists were all pleased that surface science had finally got the nod from the Nobel committee. As ACS president Katie Hunt said: ’I am delighted that the prize recognises a field of chemistry that often receives little public attention, and yet has transformed lives in so many ways.’

Thanks to the efforts of Ertl, Somorjai, King, and many others, surface science is now a mature discipline. But some argument remains about the transition from fundamental research to the real world goal of developing better catalysts, says Vickerman.

’Funding agencies are asking questions - how directly applicable is this to catalysis?’ he says. Detractors argue that while the catalytic converter was developed with the aid of basic surface science research, many catalysts are best optimised by industry alone. The basic science often rationalises why a particular catalyst works so well, but can’t always make sufficiently useful predictions for improvement. Somorjai disagrees with this view, saying that once the original catalyst is found by trial and error, later permutations and refinements depend strongly on basic surface science research.

This is increasingly true as fundamental research is taking place under conditions closer to the real world. As Somorjai puts it, ’Real life is not an ultra-high vacuum system.’ So plenty of work is being done investigating how molecules behave on surfaces at ambient pressures - using the same techniques, such as x-ray photoelectron spectroscopy, that had to be restricted to low pressure in the 1960s and 70s, but have now benefited from improved instrument design.

It’s also clear that, unsurprisingly, the surface of a real catalyst is dirtier and more confusing than a perfect crystal. Molecules diffuse in and out, rather than gliding over the surface top; metal bonds restructure; nano-sized lumps of catalyst can have catalytic activity greater than their surface area would suggest; and even an inert silica support for a catalyst can affect the rate of a reaction by binding substrates and intermediates.

Key areas for advance in surface science, says Somorjai, include understanding selectivity in surface catalysts - why some reactions are preferred over others when there are very small energetic differences between them - and the effects of nanocatalysis. Moving away from speeding up industrial reactions, bio-interfaces - those in bone implants and contact lenses - are taking over the field, with issues of biocompatibility still unsolved.

But none of this work could be considered without Ertl’s pioneering beginnings. As Ortwin Hess, a condensed matter theorist working at the University of Surrey, sums up: ’Ertl’s lifelong work has lifted the subject of molecular chemistry at surfaces from alchemy to cutting-edge 21st century science.’