In July’s issue David Jones told anecdotal tales of the possible origin of the flotation process for enriching mineral ores (Chemistry World, July 2016, p80). It is pretty well established that the process was invented following observations made at the Glasdir copper mine near Dolgellau, Wales. 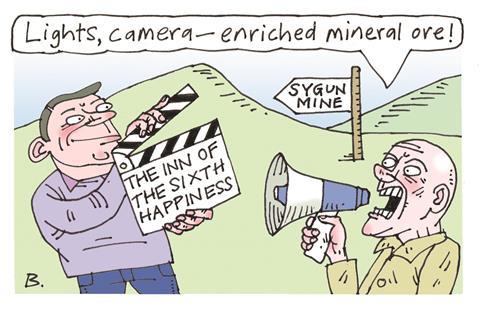 When a slurry of finely ground low grade ore passed down a water chute, pure ore was found to have stuck to oil dripping onto the chute and onto an oily handprint. This inspired the process that was subsequently patented by Frank Elmore in 1889. The wording of the patent was rather loose and left room for exploitation. A plant was constructed at the Glasdir mine, and others subsequently at Sygun, near Beddgelert, and at Clogau St Davids, near Bontddu – the latter best known as a gold mine.

Today only the terraced foundations of these early plants remain. However, the site of the Sygun mine and flotation plant achieved immortality in 1957 when it was used as the filming location for The inn of the sixth happiness, starring Ingrid Bergman.

Thank you for the lovely obituary for Harry Kroto (Chemistry World, June 2016, p40). His contribution to our understanding of carbon’s allotropes is unique. Reading the article, I wondered if this is the end of the story. I suspect not.

How are the valency bonds in amorphous carbon satisfied? In my 1935 edition of Eric Holmyard’s Elementary chemistry I find reference to ‘retort carbon’, described as a very hard deposit on the walls of retorts in gasworks where coal is being destructively distilled. Apparently its excellent electrical conductivity made it useful as the ‘carbons’ in arc lamps. Presumably it was formed by sublimation of carbon, but what is its structure at the atomic level?

The excellent memorial article on Harry Kroto (Chemistry World, June 2016, p40) mentions the work of Jonathan Hare, along with Kroto, in the isolation, separation and characterisation of the fullerenes C60 and C70. However, it does not mention the pivotal part Roger Taylor played in the practical chemistry. Together, in a 1990 paper[1] they described the first chromatographic separation and purification of the fullerenes C60 and C70 and, for the first time, reported their carbon-13 spectra. C60 gave one signal after an overnight run and C70 gave five signals. This data provided the first verification of the structure of C70, which was expected to have five signals in a ratio of 1:1:2:2:1. Three signals were indeed half the strength of two others. This work showed that C70 was a closed cage and provided further evidence for the stability of the fullerene family.

This work was, in part, featured in a TV documentary. Kroto had a coloured solution of C60 in a sample vial on his desk, but then he received the pivotal paper from Krätschmer to referee on the solid state characterisation of this compound. It was a gripping moment in science that is not to be forgotten. 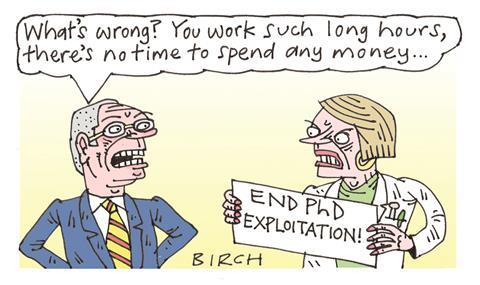 I find the chart on how stipends vary between countries in the June issue quite misleading (Chemistry World, June 2016, p67). The comparison between PhD ‘salaries’ in the US, Germany, Italy and the UK does not hold up on closer inspection. While in the US PhD students receive a taxable stipend, in Italy and the UK the stipend is not subject to tax.

Germany presents an altogether different situation. PhD students are officially salaried and pay tax like every other employee. Although the average salary of €42,622 (£35,710) mentioned in the article is the base salary, in actual fact German PhD students only get part-paid (half to two-thirds depending on the university). This equates to €25,000–30,000 before tax, leaving €18,000–22,000 to take home after tax.

All in all, it is quite sickening that our brightest students have to spend four years or more being exploited, working 45–70 hours

a week, often weekends or late evenings, and take home just enough to live on. The UK non-taxable stipend system also puts PhD graduates in an unfair position, as their hard work is not even recognised as a proper job by future employers or the state pension system. I’d much have preferred paying tax as in Germany, and having these PhD years count as real work experience instead of ‘student life’, which it certainly wasn’t!

Chemistry World welcomes letters, which should be concise (normally fewer than 300 words) and timely. Those selected for publication are subject to editing for clarity and length.

Letters should be marked ‘for publication’ and sent to chemistryworld@rsc.org. Letters are not routinely acknowledged. Selected letters can be found at rsc.li/CWopinions