A polymer membrane that can recover valuable aromatic molecules from waste streams has been developed using novel photochemistry, report chemists and chemical engineers in the UK. Preliminary tests have shown the new membrane, based on polypropylene glycol, can remove certain aromatics with more than 20-fold greater efficiency than current silicone rubber membranes.

Researchers at a spin-out company from Imperial College London, Membrane Extraction Technology, developed a technique called MARS (membrane aromatic recovery system), which was subsequently commercialised. Here, an aqueous waste stream containing hydrophobic aromatic molecules, such as chlorophenols, cresols or aromatic amines, is run past a silicone rubber membrane. The aromatics dissolve in the membrane and pass to the other side, where they are exposed to a highly acidic or alkaline environment, causing the molecule to become ionised. In its ionic form the molecule cannot pass back through the membrane - it is effectively trapped, and can be concentrated, removed and recovered. A plant in Knottingley, UK is using MARS to recover p-cresol. 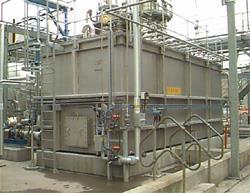 The membranes employed in the first generation of the MARS process had limitations, and a research project was initiated at Imperial to seek improvements. ’The problem with silicone rubber is that it will grab only highly hydrophobic molecules, many of which are not especially valuable, and the rubber degrades in the presence of extreme pH environments,’ team leader Andrew Livingston told Chemistry World.

A theoretical investigation of the ideal membrane composition pointed to polypropylene glycol (PPG). But this is a viscous liquid in its native form and does not lend itself to the application, where a solid is needed.

Joachim Steinke at Imperial College’s department of chemistry came up with a novel way to cross-link the polymer by functionalising the end-groups of the PPG molecule with oxetane groups. In the presence of an onium salt photoiniator, UV light causes the cationic ring-opening polymerisation of PPG, creating a gel.

The researchers impregnated a porous polypropylene sheet with functionalised PPG and exposed it to UV light. The pores of the sheet then became plugged by cross-linked PPG, and this membrane was then used in a bench-scale MARS process.

’We got excellent results, with the new membrane having a mass transfer rate 20 times greater than that of silicone rubber,’ said Livingston. ’The membrane remained stable in 10 per cent caustic soda solution for more than two months under MARS operating conditions. We have shown that the membrane separates aromatic acids and that we will be able to recover a much wider range of molecules than is currently possible. We are in the process of assessing the membrane for the recovery of bases.’ Simon Hadlington