The longest ever synthetic carbohydrate, a sugar with 100 monosaccharide units strung in a linear chain, has been made by chemists in Germany in just eight days.1 The team used an automated synthesiser for 201 of the 203 steps. The 100-mer beats the previous record holder, a 92-mer created by human chemists via convergent total synthesis in 2017.2

Automated synthesisers can easily prepare long peptide or DNA sequences – polymers with 200 individual units are nothing unusual. But automated polysaccharide synthesis is lagging behind as there are more things that can go wrong. Each monomer addition creates a new stereocentre that needs to be controlled, and the polymer can produce linear as well as branched sequences. 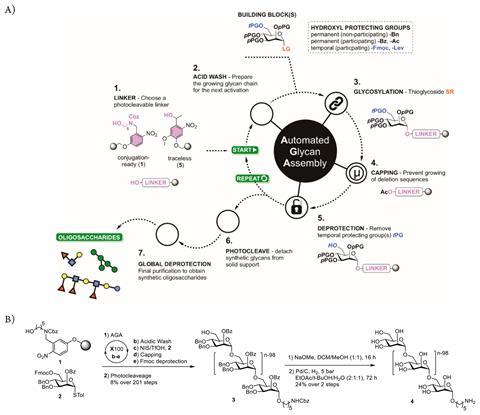 But teams like those of Peter Seeberger from the Free University of Berlin are working on automated synthesisers that can handle polysaccharides. They have now pushed their technology to a new limit by getting it to assemble a linear polymannoside with 100 units and a branched version with 151 individual building blocks.

Fixed on a solid support, the growing polymer goes through a four-step process – acidic wash, glycosylation, removal of unreacted nucleophile and cleavage of temporary protecting group – for each monomer addition. The 100-mer took 203 steps, yielding 2% of the product in just 188 hours. The branched 151-mer was made in a convergent synthesis combining four 30-mers and one 31-mer, requiring removal of 451 protecting group in the final steps.