Assumptions about how certain key molecules behave on the surface of dust grains in deepest space might be wrong, report UK chemists.

Chemists in the UK have demonstrated that previous assumptions about how certain key molecules behave on the surface of dust grains in deepest space might be incorrect. The findings could help astronomers develop more accurate models for the behaviour of molecular species in the regions of space in between the stars.

Interstellar regions are rich in molecules, ranging from simple species such as hydrogen to more complex structures containing 12 or more atoms. Cosmic scientists need a detailed description of the formation, behaviour and fate of these molecules, which could play a role in the formation of new stars.

Many of the species exist in quantities that are too large to be accounted for by their formation purely in the gas phase. For many years it has been hypothesized that some of these molecules are formed by catalytic processes on the surface of sub-microscopic grains of dust that are found in these regions.

Wendy Brown, of the chemistry department at University College London, has been leading new research to build a greater understanding of processes that occur on the surfaces of interstellar dust. Scientists in the UK, including Brown’s group and researchers at Nottingham, are currently playing a leading role in this research. ’Astronomers can model gas-phase and ion-molecule reactions in these regions with reasonable accuracy but can only estimate surface processes,’ says Brown.

The dust grains are believed to be largely carbon- and silicon-based, and are often covered in films of frozen water and other molecules such as methanol and carbon dioxide.

Brown’s team is simulating the conditions of deep space in the laboratory and using graphite surfaces as model dust grains. The UCL researchers have been gathering the most detailed data yet on the kinetics of desorption of key small molecules from graphite. 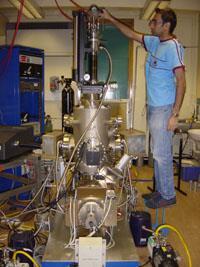 The graphite sample is held under ultra high vacuum and cooled to around 90K. Samples of molecule are introduced to the chamber where they alight on the surface. Then, using a process called temperature-programmed desorption, the temperature is increased gradually and mass spectrometry monitors the molecules as they leave the surface.

’The current models for this process, based on experiments with metal surfaces, assume that all these key molecules come off the particles with a perfect zero-order desorption,’ Brown says. ’In effect this means that a given molecule on the surface is "unaware" of its neighbours. As soon as the correct temperature is reached, all the molecules explode off the surface simultaneously regardless of the initial concentration.’

However, the UCL team has shown that for graphite surfaces this is not the case.

In other words, the concentration of the molecule on the surface does have a bearing on the kinetics of desorption - probably due to hydrogen-bonding phenomena. This could be important for the overall dynamics of molecular processes on the surfaces.

Will this make a difference to the astronomical models? ’At the moment we aren’t sure,’ Brown says. ’The astronomers are currently feeding the new data into their models. It is conceivable that the new kinetic data might be significant for regions adjacent to some types of stars and not others. But in any event it is important that the role played by the dust surfaces is fully understood. It might be that the nature of the surface is irrelevant, or else it could be important. Either way, the astronomers need to know.’

The UCL team now hopes to induce the synthesis of molecules on graphite surfaces from precursors to observe the mechanisms and kinetics of molecular formation. Simon Hadlington