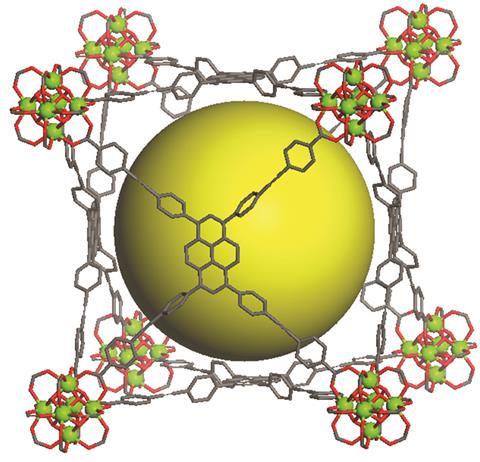 In a quest to improve gas storage in hydrogen powered vehicles, researchers in the United States and Saudi Arabia have computationally assessed more than 13,000 metal–organic frameworks (MOFs) for their ability to absorb hydrogen at low temperatures. This way, the team found two materials that in experiments turned out to store more hydrogen per volume than is possible by simply compressing the gas.

In room-temperature fuel tanks, flammable hydrogen gas is compressed to around 700 bar, which has been a major roadblock to hydrogen powered vehicle development. Researchers are now developing cryogenic tanks that can hold the same amount of hydrogen at only 100 bar by storing the gas at 77K (–196°C) inside porous materials such as a MOF. However, the huge number of possible MOFs makes it impossible to synthesise and test them all.

Now, Randall Snurr’s group at the Northwestern University in the US has developed a method to computationally generate 13,512 MOFs and virtually test them for their low temperature hydrogen storage capacity. Other virtual (so-called bottom-up) screening methods generate random new MOFs by combining metal ions and organic linkers, which means that they struggle to produce materials with varied geometries. Snurr’s top-down method, however, starts with 41 pre-set MOF geometries and then ‘place[s] the building blocks, and generate[s] the structures that way,’ he explains. 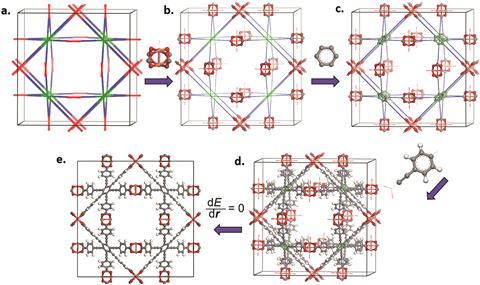 During virtual MOF construction, the computer chooses one of 41 topological blueprints (a), then adds the inorganic and organic building blocks (b–d), and finally connects and optimises the structure (e)

The team and their collaborators then synthesised two MOFs, one of which had previously been made while the other one was new, and experimentally measured their hydrogen absorption ability. Snurr’s group found that computer-predicted values matched the experimental values with around 90% accuracy. In experiments, one promising MOFs could store 43g of hydrogen per litre at low temperatures – significantly more than the 37g l–1 possible in high pressure hydrogen tanks.

Kim Jelfs, a computational materials researcher at Imperial College London, UK, notes that ‘whilst often computational screening of MOFs can struggle with either the stability or ability to synthetically realise the target materials, in this case several of the most promising materials have already been made or were made as part of this study. This includes the synthesis of some new, beautiful, structures with the she-topology and six-coordinated linkers.’

Snurr and colleagues now plan to make further use of their large data set. ‘We’ve got many materials and now we can look through them and think you know which of these would be cheap to manufacture which of these are likely to be really stable,’ says Snurr. The team also wants to use their screening method to identify MOFs that are promising for natural gas storage and CO2 separation.