The Grid - a global network of research computing resources - has been used for the first time to calculate the free energy of the binding of peptides to a protein domain.

UK researchers have for the first time used the Grid - a global network of research computing resources - to carry out complex calculations of the free energy of binding of peptides to a protein domain. Such calculations can take months on conventional computers, but results were produced in just a few days using the Grid.

The findings demonstrate that the Grid has the potential to dramatically accelerate the calculation of binding free energies, which is crucial to understanding how molecules interact. 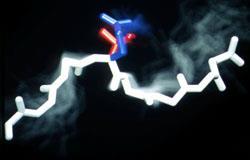 Peter Coveney’s group at the Centre for Computational Science in the Department of Chemistry, University College London, has been investigating the free energy of binding of peptides to a protein domain called SH2, which plays a central role in many cell-signalling pathways and is a potential drug target.

’It is extremely complex to simulate all the potential configurations and energetic interactions between the peptide and the protein, which involves tens of thousands of individual atoms,’ said group member Philip Fowler. ’Using molecular dynamics or Monte Carlo simulations on a conventional computer can take literally months to arrive at a figure.’

Coveney’s group, working with experimentalist Gabriel Waksman, tapped into the US-based TeraGrid of supercomputers and the UK’s RealityGrid to run multiple parallel simulations. Fowler has successfully calculated the difference in binding energies between the SH2 domain and two peptides that differ in one amino acid. The work is unpublished. ’This took about a week on the Grid, and would probably have taken at least a couple of months otherwise,’ Fowler told Chemistry World. ’By accelerating the calculations to this degree, it should be possible to work more closely with experimentalists, and to test new ideas much more quickly.’ Simon Hadlington