Nasa has appointed two engineering teams to investigate why a large piece of insulating foam broke off from the Space Shuttle Discovery during its launch at the end of July.

Nasa has appointed two engineering teams to investigate why a large piece of insulating foam broke off from the fuel tank of the Space Shuttle Discovery during its launch at the end of July. 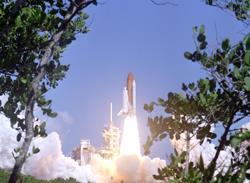 Lift off for Space Shuttle Discovery

The widely-reported incident proved embarrassing for Nasa, which has spent millions of dollars trying to reduce foam shedding from the fuel tank, after this was pinpointed as the likely cause of the break-up of the shuttle Columbia in 2003.

Insulating foam is applied to the shuttle’s fuel tank to keep its fuel of liquid hydrogen and liquid oxygen at the necessary low temperatures. The foam provides insulation both during the shuttle’s 180-day stay at the launch pad and during launch, when it can be exposed to temperatures of up to 1200?F.

Bits of foam have always fallen off the shuttle during launches, due to a combination of increasing temperature and decreasing atmospheric pressure causing air trapped beneath the foam to expand. Usually, these bits of foam are fairly small and don’t do much damage to the shuttle.

When Columbia was launched in January 2003, however, a piece of foam the size of a suitcase broke off the fuel tank and struck the leading edge of the shuttle’s wing. It punched a 30cm-wide hole into the carbon-composite material, known as reinforced carbon-carbon, that forms the leading edge. During re-entry, superheated air coursed through the hole, causing the shuttle to break up.

Over the following two years, Nasa conducted numerous tests and implemented a number of measures to try to reduce foam shedding during launch. These mostly involved reducing the amount of foam that is applied by hand to tricky areas of the fuel tank, such as where the tank is attached to the shuttle. These areas are most prone to shedding.

By contrast, Nasa hasn’t changed the composition of the insulating foam much since the shuttles first flew in the early 1980s. The foam is based on polyurethane and is composed of five primary ingredients: polymeric isocyanate, a flame retardant, a surfactant, a catalyst and a blowing agent (which used to be CFC 11, but is now HCFC 141b). Nevertheless, Nasa was confident that the measures it had taken would reduce the level of foam shedding and completely prevent larger pieces from breaking off.

Although fewer pieces of foam did fall off Discovery’s fuel tank, another large piece - around 30 inches long and 10 inches wide - came off, and was spotted by the shuttle’s newly-installed suite of cameras. Nasa has now grounded the shuttle fleet until it can identify the cause of the foam shedding and fix it, which may involve altering the foam’s composition.

’This is a test flight,’ explained Nasa Administrator Michael Griffin. ’Among the things we are testing are the integrity of the foam insulation and the performance of new camera equipment installed to detect problems. The cameras worked well. The foam did not.’ Jon Evans