Japanese chemists have made the first full silicon analogue of an aromatic hydrocarbon.

Japanese chemists have made the first full silicon analogue of an aromatic hydrocarbon. Akira Sekiguchi and his team at Tsukuba University made a triangular molecule of three silicon atoms that mimics the aromatic stability of the cyclopropenium cation. 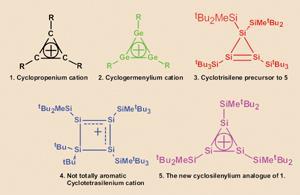 The concept of aromaticity has fascinated chemists since the 1860s when Friedrich Kekul?   grappled with the problem of benzene’s (C6H6) molecular structure, famously dreaming of whirling snakes biting their own tails. Kekul? came up with a regular hexagon for benzene, but this meant arranging its electrons in three alternating double bonds; a highly reactive configuration. That benzene was not as reactive as its structure was suggesting, puzzled chemists. Erich H?ckel solved this problem in the 1930’s with the first awakenings of molecular quantum mechanics.

His rudimentary calculations allowed him to predict that any circular hydrocarbon molecule with alternating double bonds (called a cyclic polyene) would have extra stability, ie, be aromatic (because the first molecules known to possess this property, like benzene, were prepared from sweet smelling compounds), if it had a certain fixed number of alternating ?-electrons. These are 2, 6, 10, 14, 18..etc, leading to H?ckel’s famous 4n+2 rule for the number of alternating ?-electrons that would confer aromatic stability on a cyclic polyene. So, benzene has 6 ?-electrons, naphthalene (C10H8) and cyclo-decalene (C10H10) have 10 each, and Franz Sondheimer’s 18-annulene (C18H18) predictably has 18, and so on.

Rudimentary as it was, H?ckel’s rule and the predictions that it fostered led to an explosion in organic chemistry research. Thus, a triangle of three substituted carbon atoms (with one double bond between two of them), on oxidation gives the cyclopropenium cation (fig. 1), fulfilling H?ckel’s 4n+2 rule for n = 0. And if it works for carbon-based cyclic polyenes, would H?ckel’s rule also apply to analogues made from the rest of the elements in group 14; silicon, germanium, etc? Sekiguchi and his team decided to find out.

They prepared the germanium analogue of a cyclopropenium cation (called cyclotrigermenylium - fig.  2) in 1997. As germanium is further from carbon in group 14 than is silicon, Sekiguchi thought that the silicon analogue (fig. 1) should also be synthetically reachable. Although Sekiguchi managed to make the non-oxidised precursor (a cyclotrisilene - fig. 3) back in 1999, try as he might it would not oxidise to a cyclotrisilenylium cation. Instead, this stubbornly formed a cyclotetrasilenium cation (fig. 4) that wasn’t fully aromatic. Sekiguchi had to first make a different cyclotrisilene and then oxidise it to the cyclotrisilenylium cation (fig. 5).

Compared with the analogous cyclotrigermenylium compound, that last structure is exceptionally unstable to air and moisture. Thus, it might appear as if it does not have aromatic ’stability’. However, germanium and silicon differ from carbon in having empty low-lying d-orbitals, which renders cyclic-polyene-type molecules made from these elements inherently unstable, especially to oxygen. It is the NMR and crystal structure of this last structure that shows it to be aromatic: the three silicon atoms are all equivalent and they form an almost perfect equilaterally triangular trisilyl cation. Lionel Milgrom