22 July 2005: Mars stays cool while getting its rocks off

Two US geochemists have poured cold water on the idea that water flowed over the surface of Mars for long periods.

Two US geochemists have poured cold water on the idea that water flowed over the surface of Mars for long periods. By studying the diffusion of argon from Martian meteorites, the researchers concluded that the surface of Mars remained below freezing for much of its history. 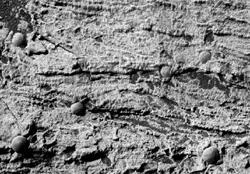 Various pieces of evidence have been uncovered to support the idea that liquid water once existed on Mars. These include: large geological features on the Martian surface that could be ancient lakes or river beds; rocks that look as though they may have been weathered by running water; and the detection by Nasa’s Mars rovers of minerals in those rocks that on Earth are often formed by the action of water (see Chemistry World, April 2004, p 6).

Argon is present in meteorites and Earth-bound rocks, mainly as a decay product of radioactive potassium. It is a fairly stable gas that naturally leaks out of rocks at a rate that varies with temperature: the hotter the rock, the more argon that escapes. Using previous measurements of argon made on two different types of Martian meteorite - two nakhlite meteorites, named after the researcher who found the first one in Egypt in 1911, and another called ALH84001, found in Antarctica in 1984 - the researchers developed models of temperature exposure that fitted the argon levels.

They discovered that the Martian meteorites, which were blasted off Mars within the past few million years, likely experienced only sub-zero temperatures for the vast majority of their billion-year existence. ’On Earth, you couldn’t find a single rock that has been below even room temperature for that long,’ said Shuster. Thus, he and Weiss claim that it is unlikely that liquid water ever existed on the Martian surface for extended periods of time.

Matthew Genge, a lecturer in meteoritics and planetary science at Imperial College, London, says Shuster and Weiss have come up with an ’ingenious’ method for measuring past temperatures. The findings are consistent with the hypothesis that Mars may have been prone to flash floods caused by melting permafrost, he says.

However, Genge advises caution about the various assumptions regarding argon diffusion that the geochemists made in developing their model. ’My own personal opinion is that it is a bit too soon to conclude that thermal underwear has always been an essential part of the Martian wardrobe,’ he said. Jon Evans