That’s a lot of boron! 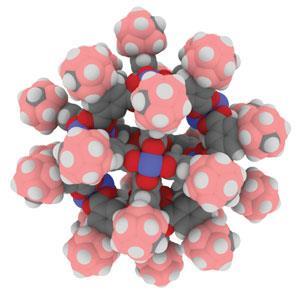 Scientists in the US have made a molecular species containing the highest number of boron atoms ever recorded in a crystallographically characterised molecular species. The unique supramolecular cuboctahedron contains 240 boron atoms and was synthesised by Chad Mirkin and colleagues at Northwestern University in Evanston, Illinois, via coordination-driven assembly.

The previous record for the most boron atoms in a single molecular species was a heptanuclear silver aggregate reported by Lars Wesemann in 2010, but this species only contained 88 boron atoms.

Boron-rich nanostructures form the basis of high-energy materials, nanoelectronic materials and boron neutron capture therapy agents. It is therefore surprising that, in comparison to the myriad of methods for making carbon-rich nanostrucutres, there are relatively few strategies for making boron-rich ones. Mirkin’s team are now pursuing the synthesis of other boron-rich supramolecular assemblies.