Gene therapy might have been given a much needed boost. Researchers have shown that silica nanoparticles can efficiently deliver genes into mouse brains.

Gene therapy might have been given a much needed boost, thanks to a team of researchers in the US and Poland, who have shown that silica nanoparticles can efficiently deliver genes into mouse brains. 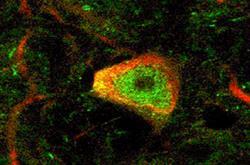 Gene therapy involves treating diseases caused by missing or defective genes by introducing a healthy version of the gene into the patient. Viruses have traditionally been used as the gene delivery vehicle, but deliberately injecting viruses into patients is not ideal. The dangers were tragically demonstrated in 1999, when a teenager taking part in the trial of a gene therapy treatment for a liver disorder died after his body reacted badly to the viral vector.

Researchers have therefore been looking for alternative gene delivery vehicles, but with little success. ’Until now, no non-viral technique has proven to be as effective as the viral vectors in vivo,’ explained researcher Paras Prasad from the State University of New York (SUNY).

The team of chemists and biologists from SUNY and the Medical University of Gdansk has been investigating amino-functionalised organically modified silica (ORMOSIL) nanoparticles as a safer means for gene delivery. These nanoparticles are quite simple to produce, as they can self-assemble as micelles when the surfactant aerosol OT is mixed with triethoxyvinylsilane in water. Cationic amino groups are then incorporataed onto the nanoparticles’ surfaces by adding 3-aminopropyltriethoxysilane. These cationic amino groups readily bind with negatively-charged DNA structures known as plasmids.

They then showed that ORMOSIL nanoparticles can deliver therapeutic genes to mouse brains by successfully introducing a gene that induced neural stem cells to begin differentiating into adult nerve cells. ’In the future, this technology may make it possible to repair neurological damage caused by disease, trauma or stroke,’ predicted SUNY researcher Earl Bergey. Jon Evans