The unusual properties of a block co-polymer make living cells grow in a precisely defined two-dimensional pattern on artificial substrates, report materials scientists and bioengineers from the UK and The Netherlands. 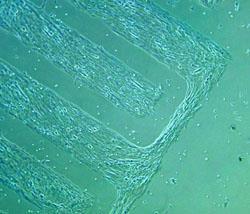 The researchers have demonstrated the technique by growing muscle cells on glass, with the cells  confined  between gold electrodes. The cells differentiate into so-called myotubes, the precursors of muscle fibres, as they grow. Myotubes contract in response to electrical stimulation, providing a viable two-dimensional model for developing muscle tissue, a potentially valuable tool for tissue engineering research.

At the heart of the technique is a block co-polymer with two key properties. One of these is to repel living cells. The other is selectively to adhere to hydrophobic surfaces by virtue of the co-polymer’s hydrophobic core and its pendant hydrophilic groups.

The hydrophobic core consists of either polymethylphenylsilane or polystyrene; the hydrophilic portion of the polymer is POEGMA -   poly(oligoethylene glycol methyl ethyl methacrylate).

’We patterned a glass slide with gold lanes - the electrodes,’ explained Simon Holder, of the University of Kent. ’We then spin-coated the slide with the polymer. When you subsequently wash the slide with water, the polymer delaminates from the glass but remains on the gold,’ Holder told Chemistry World. The co-polymer repels cell growth, so cells are subsequently free to grow on the glass channels while the gold remains free of cells.

Colleagues at the University of Eindhoven led by Nico Sommerdijk successfully seeded the prepared slides with cultured mouse muscle cells - myoblasts - which colonised the glass channels but not the gold electrodes. The myoblasts grew and differentiated into myotubes, and these responded to electrical impulses sent via the gold electrodes.

’Precisely why the co-polymer delaminates from hydrophilic surfaces but not hydrophobic ones is not entirely clear, though the self-organisation of the block copolymer is likely to be a factor,’ Holder said. ’We have demonstrated the same effect as we achieved with gold with fresh, unoxidised copper, silver and silicon. The nice thing about this system is that you can create the template in one simple step - you just coat the patterned substrate with the polymer and wash it off.’ The results of the work will appear shortly in Advanced Materials.

The researchers are now exploring another property of this type of co-polymer to create patterned surfaces for cell growth.

’Polysilanes are photoresists,’ said Holder. ’When you expose the copolymer to UV light it degrades. We use a copolymer in which the hydrophilic block is PHEMA - poly(hydroxyethyl methacrylate) - which has cell-repelling properties but does not display self-delamination. So you can coat a substrate with this polymer, cover it with a photolithographic mask and expose it to UV. Where the light strikes the polymer it degrades and comes away from the surface. In this way we can pattern a surface to dictate where cells can grow. This is useful for situations where the spatial and geometric relationship between growing cells is important, in bone tissue for example.’

The co-polymer can also be induced spontaneously to form micelles and thin films, which are degraded by UV light. The researchers are examining the possibility of using these structures to carry small hydrophobic molecules which can then be released in a controlled way by exposure to UV.

’One could imagine a drug delivery system, or a way of releasing compounds into the environment,’ Holder said, stressing that this work is at an early stage. Simon Hadlington