3 August 2005: Grabbing proteins by the ELPs

A new method for protein purification based on self-cleaving polypeptide tags will be simpler and cheaper than current techniques, claim researchers.

US chemical engineers have developed a method for protein purification based on self-cleaving polypeptide tags. The breakthrough promises to be simpler and cheaper than affinity chromatography, the current standard method for purifying recombinant proteins.

They have developed an ELP that spontaneously groups together and falls out of solution when heated to 30?C. This is attached to a self-cleaving protein segment known as an intein.

The method involves inserting a fusion gene that codes for both the ELP and a protein of interest into Escherichia coli cells, such that the bacteria produce the protein bound to the ELP via the intein. Wood’s team kill the cells and remove the insoluble debris by centrifugation. The remaining cell solution is heated, causing the ELP and the bound protein to fall out of solution. 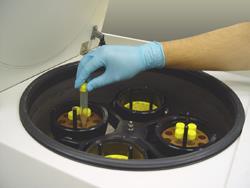 The ELP-protein fusion is then removed by centrifugation, after which it is re-dissolved in a low-salt pH 6.0 buffer to initiate the self-cleaving reaction, thereby releasing the protein. The researchers tested this method with 10 different proteins, and discovered that they could recover all of them at high levels of purity.

Wood and his team now plan to investigate ways to scale-up the process, such as by using tangential-flow microfiltration or continuous centrifugation. They are also exploring other uses for the ELPs. ’We are currently working on several methods for protein purification using self-cleaving tags in a variety of configurations,’ he told Chemistry World. Jon Evans