It is now possible to control substitution of transition metals in lithium nitride and the level of lithium ion vacancies within the doped structure, report UK chemists.

It is now possible to control substitution of transition metals in lithium nitride and the level of lithium ion vacancies within the doped structure, report UK chemists.

The findings are significant, they say, because doped lithium nitrides are promising materials for efficient anodes in rechargeable batteries, and the extent of doping and the number of vacancies within the materials’ structure are crucial to their electronic and ionic conductivity. 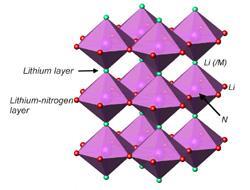 Lithium has long been recognised as the ideal basis for high energy density rechargeable batteries. Theoretically, elemental lithium would be the best anode material, with a high capacity (the amount of electrical energy produced over a given period of time per unit mass of material) and excellent redox properties. However, the structure degrades quickly, making it unsuitable and unsafe. Instead, graphite doped with lithium has proved an acceptable alternative, although it has a relatively limited capacity.

Lithium nitride, Li3N, has been investigated as an efficient alternative. It has high ionic conductivity in its native state, but no electronic conductivity. If it is doped with certain transition metals, however, it becomes conductive.

’The advantage of these kinds of materials is their high capacity,’ said Duncan Gregory who leads the research at the University of Nottingham, UK. ’At up to 1000 milliamp hours per gram, this is two- or threefold higher than lithiated graphite.’ Unfortunately the materials produced so far have suffered from relatively poor cyclability.

In a bid to improve the materials, the Nottingham researchers have synthesised a range of novel doped lithium nitrides and have, for the first time, identified the mechanisms responsible for the materials’ conductive properties.

Lithium nitride is a layered structure, with sheets of lithium and nitrogen interleaved with sheets of lithium alone. The Nottingham chemists used neutron diffraction to show that when transition metal ions are inserted into the lattice they occupy positions in the lithium-only layer. The substitution of a lithium ion in this layer has the secondary effect of removing lithium from the lithium-nitrogen layer, creating a lithium vacancy.

’Because ionic conduction in these materials relies on lithium hopping from occupied sites to unoccupied sites, an increase in the number of vacancies results in increased lithium ion conductivity,’ said Gregory.

The researchers, whose work is unpublished, have demonstrated that it is possible to control both the extent of substitution by transition metal ions and the number of lithium ion vacancies by varying the reaction temperature and duration during the preparation of the compounds.

’We have also shown that even if you fix the amount of transition metal, you can still increase the number of vacancies by increasing the reaction temperature,’ said Gregory. This is important, says Gregory, because it opens the way to gaining control over the electronic and ionic conductivity of the materials.

’Until now, to create lithium vacancies in these sorts of materials, you must first make the compound then extract lithium ions subsequently by electrochemical methods,’ he said. ’We have shown that it is possible to create nitrides with high levels of vacancies in a single step.’

The researchers have succeeded in substituting the entire lithium-only layer of lithium nitride with nickel, producing LiNiN, which is metallic, unlike Li3N, which is a semiconductor.

’Colleagues in Vienna have used density functional theory to calculate the electronic structure of lithium nickel nitride and have shown that chains of N-Ni-N are responsible for the metallic nature of the material,’ said Gregory.

The team is now using combinations of transition metals within the lithium nitride lattice in an attempt to squeeze more efficiency from the system. ’Nickel gives the structure high stability, but has a relatively low capacity,’ said Gregory. ’Cobalt on the other hand has a high capacity, but the structure is less stable. We are trying to exploit the properties of both transition metals and have successfully synthesised lithium nitride doped with both nickel and cobalt. Preliminary electrochemical tests have shown that it does have high capacity. Simon Hadlington