A cancer treatment that goes further 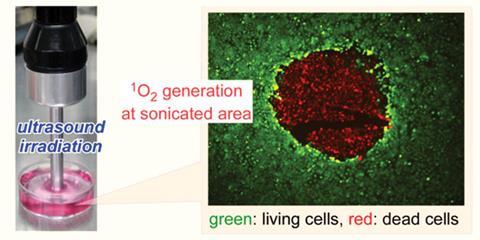 A cancer treatment that uses titanium dioxide nanoparticles to kill tumour cells has been given a sound revamping by researchers in Japan. The new strategy improves the stability of the nanoparticles and the treatment may be able to penetrate more deeply into human tissues than ever before, targeting problematic tumours, through the use of ultrasound.

Atsushi Harada and colleagues at Osaka Prefecture University encapsulated the titanium dioxide nanoparticles inside micelles (an aggregate of surfactant molecules dispersed in a liquid colloid). The team grafted polyethylene glycol, a polymer with many medical uses, onto the micelles to stabilise them, improve their biocompatibility and to ensure that the micelles had negligible cytotoxicity. ‘Low cytotoxicity is the most important property of our micellar system,’ Harada explains.

Titanium dioxide is a photosensitiser that is normally activated by far-red light, which results in the release of reactive oxygen species that can kill cells. This treatment regime is already used in hospitals and is known as photodynamic therapy. However, far-red light can’t penetrate deeply into human tissue, so the team turned to ultrasound as an alternative. Ultrasound, like far-red light, is non-invasive and doesn't cause any damage to cells, but has the advantage that it can penetrate much further into tissues and target cancers deep within the body.

The team found that the titanium dioxide-containing micelles were taken up by both normal, healthy cells and HeLa cells - an immortal cell line often used in cancer research. When the micelles were exposed to ultrasound, the titanium dioxide nanoparticles generated reactive oxygen species, including singlet oxygen, which is widely believed to be the main cytotoxic agent in photodynamic therapy. This means that, in theory, by carefully directing the ultrasound energy, it should be easy to adapt this approach for the clinic so that only the tumour is targeted and killed by these oxygen species.

‘The concept of developing sonodynamic therapy (SDT) as a complementary or a competing approach to photodynamic therapy (PDT) has been around for several years, although it has been studied only sporadically,’ says Tayyaba Hasan, professor of dermatology and health sciences and technology at Harvard Medical School in the US. There has been some success of SDT with PDT agents, but using titanium dioxide nanoparticles trapped in micelles is somewhat new and exciting, she adds. ‘However, the claims of clinical utility are premature as all data are in a monolayer of cells.’ If the advantage of SDT over PDT is the greater depth of penetration, then in vivo experiments are a must before such claims are justified, she concludes.

Harada’s team plans to carry out an in vivo experiment by intravenous dosage. ‘We will evaluate the biodistribution of the micelles and the inhibition of tumour growth by ultrasound irradiation,’ he says.