A new universal signaller for cell-to-cell communication in bacteria has been discovered by a team of US scientists.

Kim Janda’s group, from the Scripps Research Institute, California, USA, believe they have found a new universal signaller used by bacteria. The process whereby bacteria secrete and accept chemicals is known as quorum sensing and allows bacteria to act as a group by changing their gene expression patterns. The signal molecules that pass between them vary from species to species, but one, called AI-2, is believed to be a universal signal. 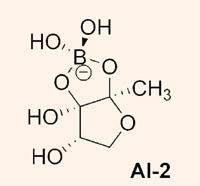 AI-2 contains boron, which while relatively abundant in sea water is much less so elsewhere. The team therefore decided to try and find signal molecules similar to AI-2 by using other metal-containing compounds.

Caesium carbonate induced light production in Vibria harveyi bacteria, while caesium chloride had no effect. Other metal carbonates showed a positive response, indicating that a carbonate species formed in situ was responsible.

This carbonate analogue of AI-2 is inherently unstable and thus induces less of a response than its boron counterpart unless in high concentration. Carbonates are also believed to play a part in the quorum sensing of dental biofilm bacteria Streptococcus gordonii due to the presence of bicarbonates in saliva as a buffer.

Janda believes that this carbonate is a new addition to the family of universal signallers in bacteria. The team hope to conduct biochemical characterisation of this very unstable compound. Group member Kathleen McKenzie commented, ’this an exciting field of research in terms of identifying novel treatments for bacterial infections by disrupting how bacteria talk to each other.’ Bacterial infections and biofilms in humans range from cystic fibrosis to dental plaque formation.