A model for the single chirality of life

The boiling solutions in prebiotic hot springs could shed light on the emergence of a single chiral form of biomolecules in nature, say Spanish scientists.

Amino acids and sugars exist in living organisms exclusively in one of their two molecular chiral forms, which are mirror images of one another. The reason for this specificity has long puzzled scientists. Conditions on Earth when life first evolved in prebiotic times presumably favoured one form over the other, but the mechanism is so far unresolved.

’We will most likely be unable to solve this fascinating conundrum, but experiments carried out under environmentally credible conditions may be important signposts to this end,’ says Crist?bal Viedma at the Universidad Complutense, Madrid. With this in mind, he and colleague Pedro Cintas have investigated crystallisation processes that lead to single chiral forms.

Some achiral molecules exist as chiral solids, including sodium chlorate (NaClO3), which crystallises in a structure with either left- or right-handed helicity. On crystallising from an undisturbed solution, a 50:50 (racemic) mixture of the two forms. 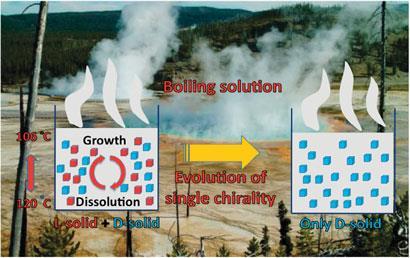 Perturbing a solution as it crystallises, for example by stirring it, leads to one chiral form almost exclusively over the other. Boiling a supersaturated solution similarly perturbs the crystallisation process with one of the two chiral forms resulting in preference.

Now, Viedma has demonstrated that boiling a solution initially in equilibrium with a racemic mixture of NaClO3 crystals also generates a single chiral phase, resulting from a temperature gradient across the solution. Crystals dissolve at the bottom where it is hotter, while the concentrated solution nucleates at the top where it is cooler. The dissolution-nucleation cycles lead to a solid of single chirality after 24 hours, which varies randomly between left- and right-handed helicity.

However, if the solid in the boiling mixture is seeded with a small excess of one form, the system reproducibly gives rise to that form alone. ’The method is simple and can be easily adopted into an industrial process,’ claims Ning Shan, director of preclinical development at Thar Pharmaceuticals, Florida, US. Shan believes that ’the method will certainly have great practical potential in the pharmaceutical industry’. This is an important point as chiral drugs must be pure because living organisms may respond in an entirely different way to the wrong chiral form.

’Our work definitively proves the role of a temperature gradient and rules out that alternative effects (notably crystal grinding) may reasonably be invoked,’ comments Viedma. He intends to extend his studies to chiral organic molecules and expects that application to pharmaceutical processing is not far off.