Strong evidence for water on the moon’s surface has been found by three separate spacecraft-based spectroscopic studies. While the amount of water present appears to be small, it is being viewed as potentially useful for astronauts visiting the moon.

’Previous measurements have only detected hydrogen and never proven what [it] was attached to,’ says Roger Clark at the US Geological Survey in Denver, who was involved in two of the studies. ’These papers describe the direct [spectroscopic] detection of the chemical bond of OH and H2O.’

Carle Pieters at Brown University, US,  and her team - whose members included Clark - analysed data taken during India’s Chandrayaan-1 mission in late 2008. NASA’s moon mineralogy mapper (M3) spectrometer onboard the spacecraft recorded infrared (IR) absorptions near 2.8 to 3.0 micrometres - that are consistent with OH and H2O - close to the lunar poles on the uppermost surface of the moon.1

Clark then separately reanalysed the IR spectroscopic data collected on the Cassini spacecraft in 1999. He again identified absorptions near 3 micrometres close to the poles and at lower latitudes. He says that the amount of water ’seen’ appears to range from 10 to 1000 ppm.2 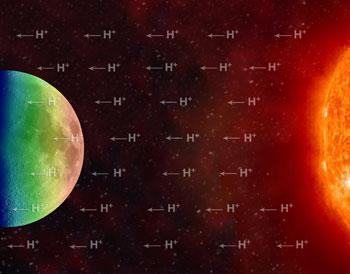 It is suggested that when the moon’s surface is exposed to hydrogen ions in solar wind, oxygen escapes from lunar minerals in the form of OH and H2O

Further support for the presence of water comes from Jessica Sunshine at the University of Maryland, US, and her colleagues who collected data in June 2009 on the Deep Impact spacecraft. At the request of Pieters’ team they studied the same places at different times of the lunar day using an IR spectrometer. They detected bound OH and H2O covering much of the moon’s surface.3

Sunshine adds that the daily patterns her team observed showed that the formation and retention of OH and H2O is a continuous process. These findings add weight to the ’solar wind theory’ to why there is water on the moon, she adds. This theory suggests that the hydrogen ions in solar wind liberate oxygen, in the form of OH and H2O, from the moon’s surface.

’The Chandryaan-1 results were the first discovery but the M3 instrument covered only a portion of the relevant wavelengths,’ says Paul Lucey, an expert in planetary science and remote sensing at the University of Hawaii. ’The Cassini measurements covered all the relevant wavelengths, confirming and strengthening the discovery but at very low resolution. The Deep Impact measurements also covered the full range of wavelengths needed for confirmation, and were able to measure the same places at different times, which suggest the water is migrating on the lunar surface.’

To put the quantity of water into perspective, Sunshine says: ’The amount of water we are talking about is still less than what you have in the soil of the hottest desert on Earth.’

Researchers are intrigued by the thought of tapping into the water. ’It is possible the steady source of water could be trapped directly by astronauts,’ says Lucey. But he cautions that the source would be very small and would require a very large collector.