A new way to look at the brain

Researchers in the US and Germany have for the first time scanned the human brain with positron emission tomography (Pet) and magnetic resonance imaging (MRI) simultaneously. The work introduces the possibility of obtaining both highly specific functional data together with anatomical information in a single scan. 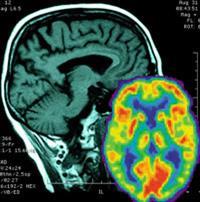 Researchers plan to measure anatomy, functionality and biochemistry at once

Pet is now routinely combined with computed tomography - a method of obtaining three-dimensional x-ray images - in the same machine, but the scans are taken sequentially not simultaneously. ’The Pet/MR system allows simultaneous measurement of anatomy, functionality and biochemistry of the body’s tissues and cells, enabling researchers to correlate MR and Pet data in a way not previously possible,’ said Bernd Pichler of the University of Tuebingen, Germany, who helped develop the system, together with colleagues from Siemens Medical Solutions and the University of Tennessee, US. The development was reported at the annual meeting of the Society of Nuclear Medicine in Washington, DC, last week.

Pet involves injecting a patient with a substrate labelled with a positron-emitting isotope. The isotope then accumulates in the tissue of interest. As the isotope decays it emits positrons, which collide with nearby electrons, leading to electron-positron annihilation. Annihilation releases a pair of gamma photons that are detected by scintillator material in the scanner, and the signal is magnified by a photomultiplier. In this way a fast-growing tumour, for example, can be detected by its accumulation of radiolabelled glucose, or the activity of a particular receptor can be monitored by presenting it with a labelled peptide substrate. However, conventional photomultipliers cannot operate within the high magnetic fields of the MRI scanner. To get around this the researchers replaced the photomultiplier with a semiconductor-based ’avalanche photodiode’ which is relatively immune to the effects of the magnetic field.

MRI works by subjecting tissue to a powerful magnetic field that aligns protons within water-bearing tissues. A radiofrequency is applied which magnetises the spins of the protons. When the field is removed and the protons ’relax’ they emit signals that can be reconstructed into an image. In this way, MRI can be used to provide detailed anatomical information on soft tissues within the body, or functional information, for example on blood flow in a tumour. ’By combining both systems you can get more information than for a single modality,’ Pichler told Chemistry World. ’For example, you can correlate the activity of a particular receptor in a tissue with the blood flow to develop kinetic models.’

Pichler estimated that a brain-scanning device could be in operation within the next two years, but that a full-body scanner would take longer to develop.

Paul Marsden, a Pet expert at King’s College London, said that researchers have been working for some time on developing combined Pet/MRI systems and have had success in small animal models, but that the development of a brain scanner represented a significant advance.

’This is exciting and I would envisage that initial applications would be in neuropsychiatric research where it would be possible to provide a stimulus to the brain, such as a drug, and observe both the effect on a receptor and blood flow, for example,’ Marsden said.

One issue that remains unresolved is the development of new contrast agents for MRI that would provide more detailed information. Pet agents are extremely small, typically consisting of natural substrates such as sugars or peptides in which a single atom has been substituted by a positron-emitting isotope such as 11C or 18F, and they can be used in tiny concentrations to produce accurate images. This means that Pet images are exquisitely sensitive. On the other hand, contrast agents for MR, which alter the relaxation kinetics of protons in the target tissue, must be administered in much higher concentrations - typically a thousand-fold higher than for Pet agents - and therefore the design of these agents is more difficult.

’There is a lot of work going on to develop new smart MR contrast agents for specific biological targets such as receptors and other proteins,’ said Marsden. ’The idea would be to get contrast agents that attach themselves to interesting biological molecules, just as they do in Pet.’