Acceleration of the spontaneous replication of RNA adds evidence to support the RNA-world theory of prebiotic evolution.

Researchers in Germany have produced further evidence that the origin of life on earth arose spontaneously from simple molecules, producing organisms whose genetic code was based on RNA.

"Full non-enzymatic replication of RNA from monomers has never been demonstrated. To achieve this remains the holy grail of this field." - Clemens Richert

The widely held RNA-world hypothesis solves the so-called chicken and egg problem of DNA replication - there can be no proteins without DNA and no DNA without proteins, so how did both end up in every living cell?

The theory relies on the fact that the original genetic material, this primordial RNA, would need to have properties not seen in the RNA of today. For example, it would need the ability to reproduce itself spontaneously during the course of a few hours.

Clemens Richert and colleagues at the University of Karlsruhe have now shown that, without the use of enzymes, an RNA strand bound to a longer template strand of RNA can grow more than one order of magnitude faster than previously believed. This growth occurs in single nucleotide steps according to the base pairing rules of Watson and Crick. 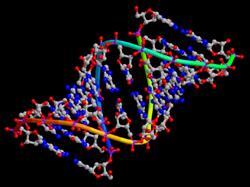 The researchers have accelerated this previously sluggish replication reaction by using novel azabenzotriazole activated ribonucleotides. They further enhanced the reaction by introducing short oligomers of RNA, which bind downstream from the incorporation site.

The replication steps take place on the timescale of hours rather than weeks, giving further support to the theory that RNA strands spontaneously replicated during prebiotic evolution.

The focus of future research will be to synthesise entire complementary RNA strands. ’Full non-enzymatic replication of RNA from monomers has never been demonstrated. To achieve this remains the holy grail of this field,’ said Richert.