Accumulation of acid in atmosphere explained

New studies may help to explain the high concentration of sulfuric acid in the atmosphere. The research could also have implications for global climate modelling, enabling scientists to reduce uncertainties related to the effects of aerosols in their predictions.

Scientists have struggled for years to reconcile atmospheric concentrations of sulfuric acid with the results of laboratory experiments on particle formation rates. According to Mikko Sipil? at the University of Helsinki in Finland, this is down to the inadequacy of particle detectors in previous experiments - the best could only detect particles of 3nm and above. But now Sipil? and a team of international researchers have developed methods to detect particles barely bigger than a single nanometre. 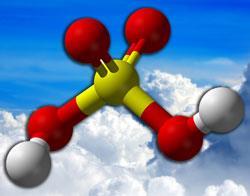 Shedding light on sulfuric acid in the atmosphere

As Sipil? explains, at concentrations below 108 molecules per cubic centimetre, as in the atmosphere, sulfuric acid particles forming by condensation from H??2SO4 gas grow very slowly. ’This means that within the residence times used in previous studies - some ten seconds typically - the particles cannot grow above the detection limit of the particle counters they have been using,’ he says.

Using their improved detection methods, the researchers show that the discrepancy of several orders of magnitude between observed and theoretical growth rates does not exist. While the growth rate they have arrived at does not exactly match predictions from theory, the agreement, they say, is ’good’.

In nucleation theory, there is a critical threshold at which particles like sulfuric acid become stable as they are condensing. The researchers suggest that a critical nucleus in this case contains one to two sulfuric acid molecules. But as Renyi Zhang, an expert in atmospheric sciences at Texas A&M University in the US, says, ’it is still difficult to explain how one to two sulfuric acid molecules, along with several water molecules, can make up a critical nucleus, from a thermodynamic point of view.’ He adds that the results still need to be reproduced by other groups.

If the results are reproduced, however, they could have important implications for climate science. Sipil? notes that the indirect effects of aerosols are some of the least well understood in climate models. ’Currently I think that in those models that are used for the [Intergovernmental Panel on Climate Change] report, the nucleation is either neglected completely or it’s somehow based on ambient observations,’ says Sipil?. ’If the detailed molecular steps are not known it creates lots of uncertainty in these models. That’s why it’s very important to understand the detailed steps as this would then enhance the accuracy of global climate predictions.’