Matt Powner is always searching for his next project. ‘When you don’t know if things are going to work, that’s super exciting,’ he says. ‘That’s what really motivates me to do science.’

At his core, Powner is an organic chemist. Recently, he’s been searching for chemical syntheses that work in water and could have created the first peptides at the origins of life. ‘Understanding the origins of life is obviously a huge problem that implicates lots of different science. And it’s a problem you can really approach with an organic chemist’s skillset,’ he says. ‘But in the lab, we’ve got to break the challenge down into projects that make sense for how we work, so we have to address problems that fit into PhD and postdoctoral timescales.’ 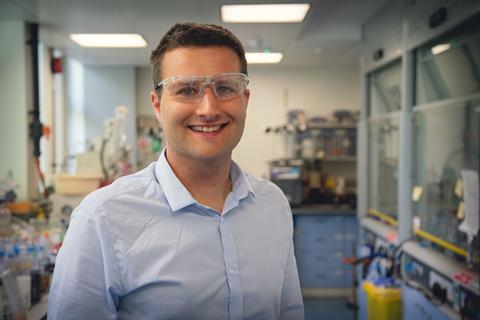 Powner’s group came to work on peptide synthesis as complete novices. ‘We wanted to address why biology synthesises peptides in a totally different way to chemists.’ All chemical peptide syntheses essentially work in the same way: incoming amino acids are activated before being incorporated sequentially to grow the polymer from the C terminus, to the N terminus. But biology does the opposite: It starts at the N terminus and makes peptide bonds at the activated C terminus of the growing polymer.

In 2019, Powner’s group reported that aminonitriles can ligate and give rise to peptides under prebiotically plausible conditions. Aminonitriles are widely accepted to be abiotic precursors to amino acids1 – ‘You just hydrolyse them to get the amino acid, in principle. But we considered, “what if we take that intermediate and instead couple that in our reactions? Are aminonitriles predisposed to yield peptides in water?”’

The group found that α-aminonitriles are perfectly set up to be nucleophiles at neutral pH.2 ‘Once it couples, you go from having an aminonitrile, where the amine is donating electrons towards the nitrile, to having an amide nitrile, where the amide is withdrawing electrons from the nitrile. By coupling the aminonitrile into the peptide, you switch the electron donating and electron withdrawing properties of the substrate. Attaching the aminonitrile to the peptide activates it as an electrophile, and then it goes through the next round of activation so you can ligate another aminonitrile,’ he explains. The findings suggest that direct ligation of proteinogenic α-aminonitriles is the simplest prebiotic pathway to peptides.

‘It’s very easy to see how you can build functional molecules via this type of strategy.3 You can later come from any angle, once you have a functional α-peptide that you need to replicate. And then biochemistry can do what biochemistry does – it can invent new angles, new pathways to bring new material from different directions that it needs to build the functional molecules. This is classic biosynthesis: when you run out of material, you shuffle it from another part of biochemistry or another nutrient source, and it becomes unimportant where the material comes from as long as you get the same product. But initially you need to discover the structure that gives you the evolutionary advantage to say this is the compound we want to make. You can’t do it the other way around. It’s got to be accidental. Evolution has no goal, it makes things and either they’re advantageous, or they’re not.’

Powner says he would never have approached peptide synthesis from such an unusual angle if it wasn’t for his very particular take on systems chemistry. ‘To me, systems chemistry is trying to learn more by looking holistically at a situation and applying rules that are constraining you from an angle that’s outside the specific point you’re investigating. You learn more if you triangulate points of knowledge than if you just have linear relationships with the knowledge.’ This systems approach underpins all of Powner’s research strands, which stretch beyond peptide synthesis. ‘Because we think across so many different molecule classes, it forces you to think about more chemistry, and it encourages you to diversify the types of questions you ask and the types of molecules that you play with. We’re certainly not the only people who approach chemistry in this way, but we don’t approach chemistry as an exercise in developing a methodology. We have a problem and it doesn’t matter how we solve it.’ 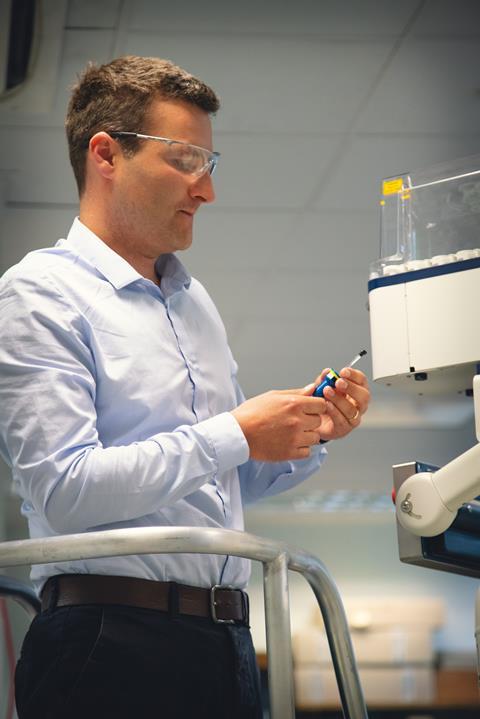 His systems chemistry approach to exploring the origins of life led to Powner being named a chemistry finalist in the 2021 UK Blavatnik Awards for Young Scientists. Reflecting on the award, he says: ‘It’s a real honour. I don’t feel ownership of the work – it’s a group exercise. And it’s great for us all to get the recognition, for our work to be seen.’

Powner tells his PhD students and postdocs to never take his word for granted – ‘we’re always going to test it’ – and that their ideas are as good as his. ‘I encourage an atmosphere where everybody is inquisitive. And I try to instil the idea that if you aren’t encountering problems, if everything you do works, then you’re not challenging yourself and you need a more difficult project.’ He also asks his group to think about their work from an external perspective. ‘How would you explain to somebody else why that’s important? Considering this can help to direct where they’re going to go next. Always think with one eye on the future.’

So, what’s next for the Powner lab? Attempt to build orthogonal structures and have them communicate between different molecular classes, he says. But, ‘if you’d asked me the same question four or five years ago, I definitely wouldn’t have said peptides. In a way, I hope that I don’t realise what we’re going to do in the next 10 years. Because that will hopefully take us somewhere new, somewhere exciting.’