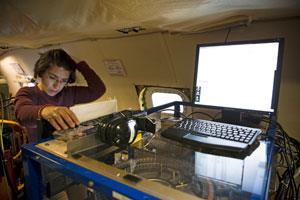 Checking the instruments onboard the NOAA ’hurricane hunter’, diverted from a mission in California to collect data above the oil

The Deepwater Horizon drilling unit, owned by oil super major BP, blew out on 20 April 2010, and by mid-June, the gushing well had generated an oil slick over 100 miles wide. On 8 June, and then again on 10 June, five scientists from the National Oceanic and Atmospheric Administration (NOAA) shared a plane with over 20 chemical instruments on a looping tour of the slick, collecting air quality data. A few of these instruments measured organic compounds and organic aerosol concentrations.

Commenting on the research, Hugh Coe from the University of Manchester says ’it’s been very difficult to unpick the roles of these intermediate volatility compounds from those of higher volatility compounds.’ IVOCs tend to be produced together with VOCs and SVOCs in, for example, the combustion of fossil fuels. They are also naturally produced by forests. According to Joost de Gouw of the NOAA, by the time IVOCs condense into microscopic droplets, they have typically acquired functional groups, or otherwise combined, until only about ten per cent of the original compounds are identifiable.

However, computer simulations of aerosol formation have shown that ’IVOCs may be one of the most important sources of organic particles during summertime air pollution episodes,’ says Spyros Pandis of Carnegie Mellon University in Pittsburgh, US. Pandis modelled this phenomenon in European cities, and he says that the work by de Gouw’s team provides the first strong evidence from atmospheric observation that IVOCs create significant amounts of particulate matter

The Deepwater Horizon slick separated the volatile compounds as it spread, creating an ideal study site. VOCs are relatively small molecules, typically containing fewer than 10 carbon atoms, and the ones from the slick evaporated within ten hours. With between 10 and 20 carbon atoms, the IVOCS required between 10 hours and four days to get airborne, and the SVOCs, with over 20 carbon atoms, took even longer. 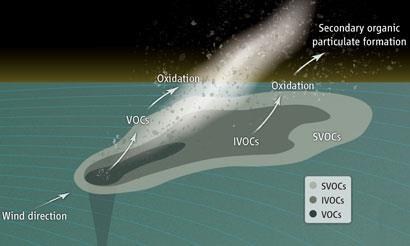 In the atmosphere, however, the IVOCs and SVOCs condensed into droplets. The data taken on the plane suggests that, downwind of the spill site, the amount of organic aerosol increased, as did the typical droplet mass - indicating that the freshly-evaporated hydrocarbons formed an aerosol. Matching their data to a simulation of hydrocarbons evaporating from the oil slick, the team found that alkane chains containing 14 to 16 carbon atoms were probably the greatest contributors.

These molecules have higher weights than most environmental laws address, and de Gouw says that the IVOCs particularly merit further investigation. ’What we need to do next is focus on these species and determine how this chemistry works in urban air,’ he says.