Ahmed Elmouna: Oligos in the desert 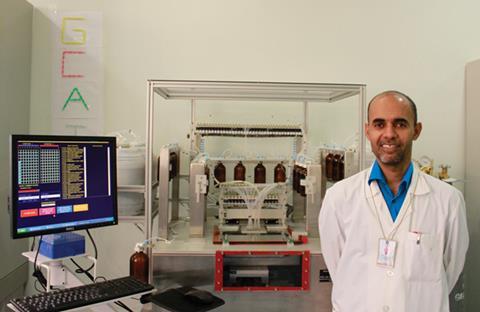 Ahmed Elmouna with the oligonucleotide synthesiser

Ahmed Elmouna is head of analytical chemistry in the molecular diagnostics and personalised therapeutics unit (MDPTU) at the University of Ha’il in Saudi Arabia. Ahmed synthesises oligos of interest to his colleagues and works on the overall quality assurance policies of the MDPTU.

Can you tell me what you’re working on at the moment?

We are working on oligonucleotide synthesis. Oligonucloetides aren’t an everyday academic project, most universities buy their oligos from suppliers but there are a few universities around the world that have a commercial branch to synthesise and sell oligos. To build one of those in Ha’il, of all places, I thought was, in itself, very interesting because we are in the middle of the desert; it is practically a no-man’s land here, or it was, not that long ago. We have successfully produced oligonucleotides and compared them with those from the industrial European market and they are very similar so much so it is very difficult to tell which one is which.

What do you then use the oligos for?

Oligos are synthetic single-stranded DNA. Let’s say we want to find out which gene is responsible for a patient’s response to treatment.  We then shortlist a small number of candidate genes and synthesise them chemically in the lab. They have the same properties as the biological genes and we then use them in tests.

Are you selling the oligos or are you only making them for research at the University of Ha’il?

Not yet, but I think there is a plan to sell them once we can scale-up, especially to other places in Saudi Arabia. At the moment oligos are imported from Europe, Asia and the US.

Does it save you a lot of money to make your own?

It does. But the idea to make our own wasn’t just about the money, it was more to do with time. Sometimes you want a certain oligo but you don’t want to wait for it to be posted. Also, if you produce them yourself then you get them fresh – there’s no risk of them being degraded in transit. So you save time, you save money and you maintain quality as well – you get better results if they are fresh.

Can you tell me more about the molecular diagnostics and personalised therapeutics unit?

It has 10 separate labs joined together including a sequencing lab, a DNA preparation and extraction lab, a microbiology lab, a pathology lab, a tissue biobank and a bioinformatics unit. All of these labs together work hand-in-hand, along with the oligo lab, to do proper molecular diagnostics. If we get samples from patients we can extract their DNA, we can sequence it – all of the different stages from beginning to end. We have a collaboration with the University of Cambridge on a type of lymphoma called anaplastic large cell lymphoma and another collaboration with the University of Nottingham on breast cancer. They send us samples to sequence and process bioinformatically here because of our facilities.

You were involved in setting up the unit from the beginning. How did this come about?

Originally I was working in the college of medicine and applied medical sciences [at the University of Ha’il] and it expanded and grew very rapidly. Our dean is very ambitious and he had a plan to build a department of molecular diagnostics. At that time there was no building or anything, it was just a piece of desert. This was only four or five years ago and now we have state-of-art sequencing machines etc. Not many universities have the type of equipment that we have – we’re talking around $50 million worth of investment.

I was picked amongst the team to set up this facility, from designing the lab and shaping the place itself to picking benches, water lines and vacuum lines. So we built it literally from scratch. I enjoyed it because it’s not a chance you get very often.

What were the major challenges in setting the centre up?

Where can I start? The contractors didn’t necessarily understand the level of quality we needed to work to. Quality. That was the single biggest challenge and it applied everywhere. 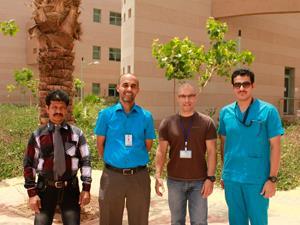 Ahmed and colleagues (left to right: Mr Mofez, Shahid Mian and Turki Alharbi) outside the MDPTU

How do science policies differ between Saudi Arabia and say, the UK?

The University of Ha’il is part of a boom of universities in Saudi Arabia that has happened recently so this is a very young system. The UK is a mature system. Things in the UK can be over-regulated: bureaucracy and health and safety are sometimes a hindrance in the UK. Here, it’s a young and emerging system that is still developing. It has the benefit of not dealing with that side of things. But, we also have the challenges of establishing reliable and quality processes. Take intellectual property (IP) as an example. There is a body in Saudi Arabia that looks after IP but it does not run at the pace you would hope. Even for our own IP we contract it out to a lawyer in the UK who files our patents.

What is the top scientific problem you are hoping to answer via research in the molecular diagnostics and personalised therapeutics unit?

We are here to serve our patients. Ultimately we want to develop diagnostics kits to identify the best course of action for patients. Genetic difference between patients means they react to drugs differently. We would rather try to find out if a patient will be responsive to a drug prior to giving it to them by sequencing their DNA.

Our routine work for the community includes targeted screening, early diagnosis and outbreak control. Our microbiology department recently contained an outbreak at a local hospital in Ha’il.

What do you do when you’re not in the lab?

I like visiting the mountains. It can be really beautiful here, especially in winter. There are so many sights to discover in Saudi Arabia. Just last week we went to an extinct volcanic crater. Nothing is commercialised for tourism purposes. It’s virgin nature and very beautiful.