All-in-one gene detection on a chip

Scientists in Singapore have invented a tiny machine that can rapidly prepare, purify and genetically analyse blood or other biological samples in less than 20 minutes.

The lab-on-a-chip device made by J?rgen Pipper and his team at Singapore’s Institute of Bioengineering and Nanotechnology can carry out the polymerase chain reaction (PCR) on ’raw’ samples - amplifying specific sequences of DNA so they can be easily detected using a fluorescent probe. 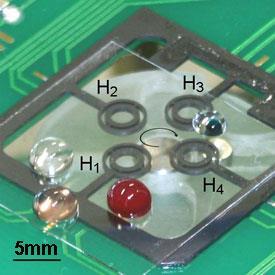 While PCR chips are becoming commonplace, until now the sample has had to be prepared in advance. The key to the new technique is to attach magnetic nanoparticles to particular cells in the sample by using antibodies, then manipulate the cells with magnets, dragging them from one ’station’ on the chip to another.

Pipper’s team add the magnetic nanoparticles coated with antibodies to a small (25 microlitre) droplet of blood placed on the chip, which is then covered in a film of mineral oil. The antibodies attach themselves to the particular cells of interest and a magnet below the chip is used to pull them out of the blood.

In this purified state the droplet containing the cells is then fused with another oil drop containing the PCR mixture. A key element of PCR is ’thermocycling’, where the sample must be cycled between three temperatures so this new droplet, which acts as a reaction vessel, is then dragged by the magnet onto various areas of the surface that are held at different temperatures.

’By having such a small sample volume of 1.5 microlitres the heating and cooling of the sample occurs very rapidly,’ Pipper explains.

A standard fluorescent label can be used to monitor in real time the presence of the gene of interest as it becomes amplified during the PCR process. The researchers showed that the entire process from presenting the sample to the chip and detecting the gene took only 17 minutes.

Nick Goddard, a lab-on-a-chip expert from the University of Manchester in the UK, says, ’This is an interesting and significant piece of work, showing that a complete PCR assay can be performed using a very small sample volume in a short time on a simple disposable substrate. The use of superparamagnetic particles as part of the assay and as the actuation mechanism for moving the droplets is particularly elegant and economical.’

Goddard adds, ’Although only a single assay can be performed using their current instrumentation, it should be possible to extend the principle to perform many assays in parallel.’