Effective antidote to deadly organophosphorus nerve agents a step away.

US researchers say they are close to developing the first effective antidote to the nerve agent sarin. The antidote could also reverse the effects of other deadly organophosphorus compounds.

Organophosphorus (OP) compounds are among the most lethal chemical weapons in existence. Perhaps the most notorious is sarin, the compound used in terrorist attacks on the Tokyo subway in the 1990s, which killed 12 people. Fears surrounding these compounds are justified. There is, as yet, no fully effective treatment for OP poisoning. 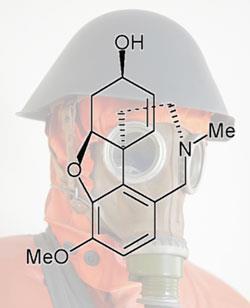 This could be about to change. A drug called galantamine, approved for treatment of Alzheimer’s disease, could halt the damaging effects of OPs. ’We are one step away from confirming that this antidotal therapy will be useful for humans,’ said Edson Albuquerque, professor of pharmacology and experimental therapeutics at the University of Maryland School of Medicine in Baltimore, US.

OPs are so lethal because they irreversibly inhibit the action of acetylcholinesterase, an enzyme that breaks down the neurotransmitter acetylcholine. The consequence is that nerves around the body remain switched on, resulting in convulsions often followed closely by death.

Albuquerque and colleagues found that galantamine protected guinea pigs from deadly OPs if the drug was delivered before or soon after the lethal injection. This could be important for those under threat of a terrorist attack, for soldiers who might be exposed to nerve agents, or for some three million instances of OP-based insecticide poisoning that occur each year, they suggest.

It remains unclear exactly how galantamine pulls off its protective trick, but Albuquerque is prepared to hazard a guess. Like the OPs it is used to treat, galantamine inhibits the action of acetylcholinesterase. The difference is that it does so reversibly, effectively shielding the enzyme from attack until the body has managed to deal with the OP. Galantamine has the added bonus of being able to cross from the blood into the brain, where it can protect central nervous system neurons from attack.

There are limits to the practical benefits of such a treatment, cautions John Henry, a clinical toxicologist at St Mary’s Hospital in London, UK. Nerve agents act so quickly that unless galantamine is immediately to hand it will do nothing to prevent nerve damage. ’It’s a clever animal study,’ he said. ’But I don’t think it’s a major runner.’

Albuquerque says the next step is to test the treatment on non-human primates. If effective, this would open the way for the US Food and Drug Administration to approve the drug as an antidote to OP poisoning in humans.

US firm plans to commercialise catalysts for decontamination.

Banned chemical warfare agents can now be detected at levels below current detection limits, claim researchers in the US.