Update: This paper was retracted on 6 December 2021 as the proposed amine catalyst was found to be contaminated with a palladium complex. We have the full story on the retraction and the detective work tracking down the elusive palladium complex that evaded detection.

In what experts have called an unexpected discovery, chemists have found that a simple organic molecule catalyses a classic cross coupling – a reaction type that has long been the domain of transition metal catalysts, in particular palladium. 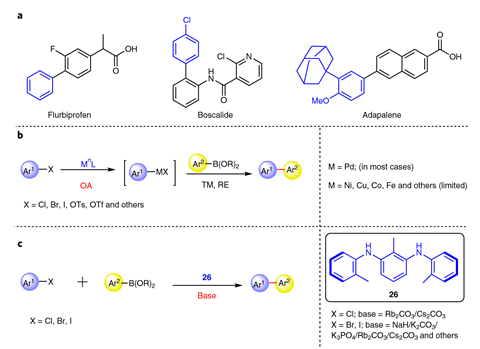 The Chinese team tested out its cross coupling organocatalyst (26) on reactions used to produce three drugs (a) that normally rely on palladium (b). The diamine organocatalyst-led syntheses of these drugs began with the same starting materials and achieved yields comparable with palladium-catalysed cross couplings

The Suzuki reaction is one of several cross coupling reactions developed in the 1970s that joins up two benzene fragments forming a new carbon–carbon bond. Cross couplings are so robust and experimentally simple that more than 60% of carbon–carbon bonds in medicinal chemistry labs are now made with this reaction.

But almost all cross coupling reactions require a metal catalyst, with the overwhelming majority using palladium – an expensive and often toxic material. In the decades since its discovery, chemists have found cheaper and more benign catalysts, based on nickel or iron for example, but they can rarely compete with palladium’s versatility.

Now chemists in China, led by Hai-Zhu Yu from Anhui University and Hua-Jian Xu from Hefei University of Technology, have found a simple diamine that could rival palladium when it comes to connecting arenes in a Suzuki-type transformation.

Unlike many other organocatalysed carbon–carbon bond formations, the reaction uses the same starting materials as a traditional cross coupling – aryl halide and arylboronic acid, hundreds of which are commercially available. Its scope ‘seems to be very comparable to many of the Suzuki reactions that have been reported before’, says Christian Malapit, an organic chemist at the University of Utah, US. Replacing the traditional Suzuki coupling step in the synthesis of the fungicide boscalid, the acne medication adapalene and the hepatitis C drug ledipasvir with their reaction, the team consistently achieved higher yields than other published methods.

‘This reaction would be advantageous in situations where the presence of trace metal in products is problematic,’ such as in pharmaceutical products, explains Shauna Paradine, an organic chemist at the University of Rochester, US. Having a soluble amine catalyst could be useful in flow chemistry setups, which often struggle with insoluble transition metals, Malapit adds.

‘The main downside is the high temperatures and higher loadings of the catalyst – comparable palladium-catalysed couplings can often be run with ppm levels of palladium – although higher loadings are less problematic with organocatalysts,’ Paradine says. For most couplings, the team used a catalyst loading of 5mol%. Some more stubborn substrates required as much as 30mol% catalyst, while a 50g scale-up reaction ran with only 0.5mol%.

Malapit notes that the team went to great lengths to show that it is really the amine doing the catalytic work, not traces of a metal. ‘[There are] notable examples in the field where unusual catalytic reactivity turned out to be too good to be true,’ Paradine point out.

What exactly makes the amine catalyst so unique still remains a bit of a mystery. Computational studies show that the mechanism certainly is very different from palladium catalysed transformations. ‘If there’s a more definitive proof of the activation step, this could be useful not only in Suzuki reactions but in any reaction that takes advantage of organoboron reagents as the coupling partner,’ says Malapit.