Amyloid protein seen to zip together

Twisted and misfolded proteins known as amyloids develop in the brains of people with a number of neurodegenerative diseases, including Alzhemier’s and Creutzfeldt-Jakob, the human form of BSE. Their long, complicated structure makes them tricky to study, but US researchers have found that they share a common feature that could provide a drug target for an array of incurable conditions.

David Eisenberg from the University of California, Los Angeles (UCLA) and his colleagues examined the structure of amyloid proteins using x-ray crystallography, a technique previously made impossible by the fact that these tangled proteins could not be crystallised. 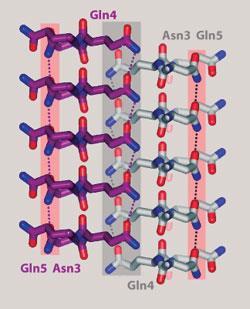 The technique uses an x-ray beam to measure the structure of a molecule. The beam is fired at the molecule and the pattern of its scattered rays reveals the arrangement of the atoms. ’You need a crystal to do this because all of the atoms must be held in a fixed position,’ explained Eisenberg. ’We managed to grow sections of these proteins into crystals.’

Eisenberg’s team was specifically interested in a small fragment of the long protein complex that forms the fibril - the folded, twisted, insoluble sheet that develops in the brains of people with amyloid-associated diseases. Their previous work purifying and assembling these protein complexes meant they could create a model of how the sections of this fragment link together and interact.

The team grew 13 microcrystals that matched the atomic structure of the fibrils of different amyloids, and discovered that each one shared a common site, which they termed a steric zipper. At this site the proteins interlink to form a dry interface.

The proteins are held in their folded formation by steric forces. These forces of attraction are caused by the close proximity and complementary shape of the interlinking molecules. ’The sidechains protruding from the sheets on each side of the fold look like the teeth of a zipper,’ Eisenberg explained.

According to the researchers, the fact that every one of these proteins contains a fibril-forming zipper suggests that it is this segment that drives fibril formation.

’We don’t know whether the formation of these amyloid fibrils are a cause or a symptom of the diseases,’ said Eisenberg. ’That is a question that at least 200 labs are working on right now, but this gives us valuable information about this structure that we can pursue. It’s conceivable that this steric zipper could be a new therapeutic target.’