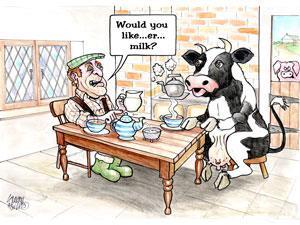 We’ve long extolled the virtues of the ancient beverage, but chemists now claim making a good strong cup of tea could have health benefits for cows, as well as people. In a study examining the chemical components of tea, researchers suggest that if producers of instant, bottled tea created a more concentrated cuppa, the waste leaves would serve as a nutritious feed additive.

In 1978, Sri Lankan researchers proposed recycling tea leaves as a cheap, protein-rich additive for sheep and cattle feed. Since then, agricultural scientists have been chewing over the benefits. It’s thought the leaves could improve cattle health while potentially enhancing the quality of meat and dairy products not to mention reducing the levels of methane and carbon dioxide produced by fermentation in the cow’s gut.

Now, in an effort to better understand how a brew could benefit our beef, a team of researchers from Newcastle University in the UK and Padjadjaran University in Indonesia, present a detailed breakdown of the components of black and green tea. They show that making more concentrated tea has a favourable influence on levels of useful chemicals – including plant secondary metabolites such as tannins, saponins and phenols – remaining in the spent leaves.

The tannins in tea make it unpalatable to livestock as a straight feed, so the researchers suggest mixing in small quantities of leaves. But Ed Clayton, a ruminant nutrition specialist at the Wagga Wagga Agricultural Institute in New South Wales, Australia, says tannin levels may be high enough that the amount that could be mixed in would be of little value. He also thinks the cost of spent leaves – even as a waste product – may make them impractical. ‘The results suggest the nutrient composition is adequate,’ he says. ‘But if the idea of feeding spent tea leaves has been suggested since 1978, why hasn’t it been adopted in the last 35 years?’

Chaudhry argues that used tea leaves could provide a cheap alternative to expensive industry additives, with potentially greater nutritional benefits. But he admits effects on health, and meat and dairy products, are ‘all hypothetical’. His lab is currently developing diets in virtual cows’ stomachs and hoping to take test feeds to the field – perhaps an odd prospect considering it could mean using tea to make milk.