’China can lead the way in applying alternatives to animal testing,’ says Melvin Andersen, a professor of toxicology from the Hamner Institute for Health Sciences, North Carolina, in the US, speaking at a Unilever sponsored meeting in Shanghai, on 14 March.

Shortly before the meeting, the Chinese Ministry of Science and Technology hosted a high-profile seminar on animal testing in Wuhan, China, calling for improved facilities for animals used in experiments. Meanwhile several research centres in Beijing, Kunming and Guangzhou for animal testing have been newly constructed.

’Replacing animals in toxicity testing is becoming a worldwide trend, but in China, policymakers have not paid enough attention to it,’ says Peng Shuangqing, director of the Evaluation and Research Centre for Toxicology at the Institute of Disease Control and Prevention of the Chinese Academy of Military Medical Sciences.

Using animals to test the safety of new drugs and chemicals has long been a typical research paradigm, but as animal welfare issues become more prominent in the western world, China has a bigger share in the experimental animal market. ’But we need to develop alternatives,’ says Cheng Shujun, a research fellow at Guangdong Inspection and Quarantine Centre. ’In some cosmetics and chemical toxicity testing, the European Commission could soon reject animal testing data,’ he warns. 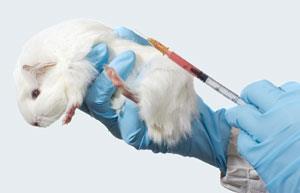 Julia Fentem, vice-president of Unilever’s Safety and Environment Assurance Centre, believes the move away from animal tests is mainly a result of scientific progress and future research priorities. ’We need to better understand how chemicals interact with human biology,’ Fentem told Chemistry World. Andresen’s colleague Zhang Qiang agrees: ’Animals are different to humans. How can we be confident enough on the safe dosage that is drawn from the dosage used in animal testing?’

The cosmetics industry may become the first sector to give up animal testing as a result of legislation. For the pharmaceutical, agrochemical and the chemical sector in general, there is no clear timetable for replacing animal testing, explains Fentem. To lower costs and increase the speed and through-put of toxicity testing is another consideration. When the European Union adopted Reach (Registration, evaluation, authorisation and restriction of chemicals) regulations in 2007, large numbers of chemicals had to be registered quickly. If animals have to be used to test the toxicity of thousands of chemicals, it will consume significant resources, time and money, says Fentem. More than 10 million animals are used for experimentation across Europe, with 10 per cent being used in chemical safety testing. Since 2007, the implementation of Reach has significantly increased the amount of animals used in chemical safety testing.

A chance for China

According to Cheng, although Reach has specific regulations toward reducing animal testing, they do not affect most Chinese chemical companies. ’But in exported chemicals used as cosmetic ingredients, Chinese manufacturers have used more non-animal methods to deal with the European regulatory requirements. It is a market worth Yuan40 billion (?3.7 billion),’ he told Chemistry World. According to Peng, there is already some funding to support research to develop alternatives to animal testing in China, though these investigations are mostly part of bigger projects to study scientific instruments and methodologies.

Studying alternatives to animal testing could result in an overhaul of the existing research paradigms in China, says Peng, whose team is exploring non-animal approaches for toxicology study. With the fast development of genomics, proteomics, metabolomics, bioinformatics and computational and mathematical approaches, scientists could more accurately analyse the potential threats of certain chemicals to human health and the environment. In the past, successful efforts have been taken to identify the hazards of many cosmetic ingredients, making it possible to directly replace some specific animal tests.

Fentem explains that previous achievements with non-animal toxicity testing are mainly based on methods for identifying hazards and classification or labelling of chemicals. She cited a 2010 European Commission expert report on non-animal methods for cosmetic testing which concluded that in the areas of repeated dose toxicity, carcinogenicity, reproductive toxicity and toxicokinetics, no timeline for full replacement of animals could be foreseen. The only human health endpoint for which a full replacement between 2017 and 2019 may be scientifically feasible is skin sensitisation (allergy), where several non-animal test methods are under development.