Anions enjoy a taste of pi

European researchers have captured the moment when an anion interacts with the pi electron cloud of an aromatic molecule, something that has been known to occur but never seen at work.

In normal circumstances an anion should have no business going anywhere near the dense electron clouds of an aromatic ring. However, if the ring is attached to strong electron-withdrawing groups, sufficient charge can be pulled away from the ring to create an electron-deficiency which can be compensated by charge from an anion. In this state the aromatic ring is termed pi-acidic.

It has been known for many years that anions can interact with pi-acidic molecules. However the details have remained debatable. ’What has been missing is evidence that these systems can actually do something, to be used as a tool,’ says Stefan Matile, of the University of Geneva in Switzerland, who led the research.

Matile’s group had previously constructed a series of long, pi-acidic aromatic molecules that could span an artificial lipid membrane and transport anions from one side to the other, with the anions purportedly sliding along the electron-deficient pi cloud. ’We could see that transport was happening, but what we could not be certain of was that it was the pi interaction that was giving us the function,’ Matile says. 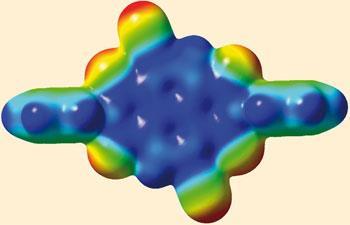 To pin down the role of the pi system, the research team constructed a series of aromatic scaffolds with varying degrees of pi-acidity. Using a technique called electrospray tandem mass spectrometry the researchers showed that two of the different pi-acidic molecules could associate with an anion - for example chloride. If the complex was then shattered by a laser pulse, the anion was shown consistently to remain associated with the most pi-acidic of the pair and whose pi-binding site was the most accessible - free from interference from side groups in the molecule.

This, says Matile, provides compelling evidence that the pi interaction is responsible for the association between the molecule and the anion.

Such an anion-binding surface could prove useful in a number of ways, Matile suggests. ’For example, anionic reaction intermediates are fundamental in organic syntheses, and if such intermediates could stabilise on a pi-acidic surface, it could provide a new way to catalyse reactions.’

Patrick Gamez of the Leiden Institute of Chemistry in the Netherlands has researched pi-anion interactions. ’During the past 10 years, anion-pi interactions have been evidenced by theoretical calculations and in single-crystal x-ray structures. However, despite these validation studies, part of the scientific community still questions the occurrence of such non-covalent contacts,’ he says. ’The present investigation is therefore of vital importance for this nascent area of supramolecular chemistry. This remarkable work clearly demonstrates that anion-pi interactions do exist, thus opening up great perspectives for this new supramolecular bond.’