Antarctic atmosphere could give Gaia hypothesis a boost

The surprising discovery of significant quantities of iodine oxide in the lower atmosphere above Antarctica will have a potentially significant impact on current models of global atmospheric chemistry, report UK researchers. The discovery could provide another thread of support for the Gaia hypothesis, which proposes that living organisms on the Earth have a regulatory effect on the physical environment.

The researchers also found that bromine oxide was present in the atmosphere for much longer periods throughout the year than previously thought, which has additional important implications for the chemistry of the atmosphere in the region.

Halogens destroy ozone in the atmosphere. In the upper atmosphere this can result in a lessening of the shielding effect of the ozone layer on ultraviolet light reaching the surface of the Earth. Lower down in the troposphere, ozone is important in providing oxidising capacity against potentially harmful compounds such as sulfur dioxide from volcanic activity, and other natural and man-made molecules.

Alfonso Saiz-Lopez at the University of East Anglia led a team from UEA, the University of Leeds and the British Antarctic Survey to measure the concentrations of the two halogen oxides in the atmosphere a few metres above the ice in Antarctica. The study lasted one year and used a technique called long-path differential optical absorption.

"We knew from satellite data that there would be bromine but we showed it persists for several months throughout the summer, which was not previously realised" - John Plane, UEA

’We discovered very significant amounts of iodine oxide above the Antarctic ice, which was unexpected,’ team member John Plane told Chemistry World. ’We knew from satellite data that there would be bromine but we showed it persists for several months throughout the summer, which was not previously realised - it was thought to be around for just a couple of months during the springtime,’ said Plane, who is based at the University of Leeds. 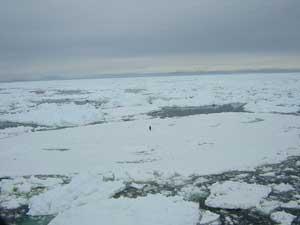 Orange-coloured algae cling to the underside of sea-ice in the Antarctic. These could be concentrating iodine from the sea and releasing it (Halley Station, Antarctica)

Both halogens derive from seawater. Bromine oxide comes from bromine ions found in seawater; the source of iodine is likely to be marine organisms such as phytoplankton and algae, which concentrate iodide ions that are eventually released into the atmosphere as small organic compounds and are broken down by sunlight.

’For many years people have looked for iodine in the atmosphere at the Arctic but found none,’ Plane said. ’The fact that we found world record amounts in the Antarctic suggests that there is a very different biology going on. The most likely explanation is that particular orange-coloured algae are present in the Antarctic, clinging to the underside of sea-ice. These could be concentrating iodine from the sea and releasing it.’

"This is a potential feedback system which fits in with the Gaia hypothesis" - John Plane, UEA

Significantly, iodine oxide can agglomerate to form nanoparticles, These provide nuclei for ice particles, eventually giving rise to ice clouds, which are important in controlling climate by, for example, reflecting light from space. ’If cloud formation is being controlled biologically, then this is a potential feedback system which fits in with the Gaia hypothesis,’ Plane said.

Gordon McFiggans, an atmospheric scientist at the University of Manchester, UK, said that the research showed that the coupled photochemistry of both iodine and bromine oxides resulted in a greater impact on oxidising capacity in the region than would result from either halogen alone. The researchers’ analysis ’manages to tease out the complex meteorological influences on the magnitude of the ozone depletion,’ McFiggans told Chemistry World. ’The discovery of such novel and wide-reaching findings should inspire further investigation into coupled halogen photochemistry,’ he said.