Scientists have found that silver nanoparticles made using bacteria have better antibacterial properties than their chemically synthesised counterparts.

Mitchel Doktycz and colleagues at Oak Ridge National Laboratory and the University of Tennessee in the US incubated Shewanella oneidensis bacteria with silver nitrate solution to produce uniform sized silver nanoparticles. 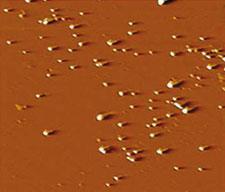 ’Biological synthesis [of these particles] is really just an offshoot of a response mechanism of bacteria from metal stress,’ says Doktycz. The team thinks that, when exposed to toxic Ag+, the bacteria converts it to stable Ag(0) as a defence. Such biological syntheses have advantages over chemical reduction routes to nanoparticles, as they give consistent sizes and material properties at room temperature and pressure, unlike the chemical route equivalents.

Doktycz and his team do not know the mechanism of toxicity but believe particle surface coatings play a key role. Analysis of the nanoparticles produced by S. oneidensis  show that they are coated with an as-yet-unknown material, although the researchers say it is characteristic of a protein. ’These coatings, it turns out, can have quite an effect on their apparent toxicity,’ says Doktycz. 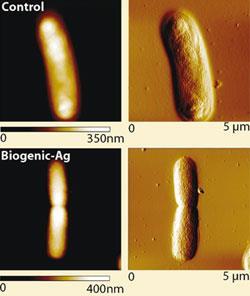 Images showing the interaction of E. coli with silver nanoparticles. Top: E. coli alone, bottom: biogenic-Ag treated E. coli. The toxic effects of biogenic-Ag nanoparticles on the bacteria can be seen by the loss in cell height and the rod shaped structure

But there are many questions still unanswered. The team wants to identify the peptide coating as well as the mechanisms of synthesis and toxicity. ’Because bacteria are so complex, it’s hard to infer exactly what’s going on,’ says team member says Anil Suresh. However ,they hope by choosing well-characterised organisms, they have given themselves a head start.

Kelvin Gregory, an environmental microbiologist at Carnegie Mellon University, Pennsylvania, US, thinks the team’s findings will have great impact on future research. ’It’s somewhat controversial in that prior work has shown that both natural and engineered polymer coatings on a range of nanoparticles greatly reduce growth inhibition and toxicity of nanoparticles in microorganisms,’ he says. ’Taken with previous work, this research suggests there are means by which particles can be designed for reduced toxicity in the environment.’

’One of the take home messages is that generic statements about toxicity and nanomaterials just cannot be made,’ claims Doktycz. ’If we can start gaining a molecular level understanding we might have a more informed approach for effective uses of nanomaterials.’