Breakdown products of an antibiotic can reverse resistance to the compound, possibly explaining why sensitive and resistant organisms can co-exist

Scientists in the US may have solved the chemistry behind a conundrum that has puzzled microbiologists for years: that in a colony of bacteria living in the presence of an antibiotic in natural environments, individuals that are sensitive to the antibiotic can co-exist with those that are resistant, whereas logic would dictate that only resistant bacteria should survive.

The key to the mystery appears to lie in the decay products of the antibiotic, according to new research by Adam Palmer, Elaine Angelino and Roy Kishony at Harvard University.

The researchers examined how breakdown products of the naturally occurring polyketide antibiotic tetracycline affected populations of E. coli exposed to the antibiotic.

In the environment, tetracycline, produced by Streptomyces bacteria in the soil, naturally decays into a number of products. The team simulated acidic decay of the compound, producing three main products: a stereoisomer of tetracycline called epitetracycline (ETC); together with the dehydration products of both tetracycline itself and the isomer, called anhydrotetracycline (ATC) and anhydroepitetracycline (AETC). 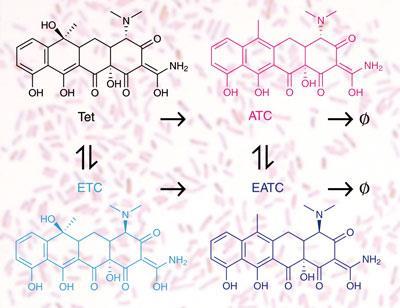 Tetracycline degrades into a range of bioactive compounds, which cause sensitive strains of E.coli to outcompete the resistant strain

One important factor is that the degradation products are relatively stable and so the bacteria remain exposed to them for some time. This is not usually the case in clinical or agricultural settings, where the drug tends to be cleared by dilution rather than degradation.

The precise molecular mechanism by which degradation products invert selection for resistance are not entirely understood, although as Kishony notes, ’One of the degradation products, anhydrotetracycline, is known to be a potent inducer of expression of the tetracycline efflux pump [a protein involved in resistance that pumps the drug out of the bacterial cells]. Such over production of the efflux pump may have a high cost to resistant bacteria.’

Julian Davies, a distinguished microbial ecologist at the University of British Columbia in Canada, describes the study as ’an ingenious series of experiments which have provided an explanation for the successful co-existence of antibiotic sensitive and resistant bacteria in the presence of the inhibitors.’

Could the findings have clinical significance? ’Unfortunately the stereoisomer is toxic to kidneys, and so is unlikely be administered as a therapeutic,’ says Palmer. He adds, however, ’This might serve as a lead compound to isolate a non-toxic compound which selects against resistance. More generally this result suggests that derivatives of antibiotics may have the potential to act as selectors against resistance.’