Antibodies could lead to MRSA vaccine

US scientists have developed antibodies against a protein belonging to methicillin-resistant Staphylococcus aureus (MRSA) bacteria. The researchers say the antibodies, which interfere with the superbug’s growth, are ’attractive candidates’ for a potential vaccine to prevent MRSA infection.

Edward Schwarz and colleagues at the University of Rochester Medical Center in New York developed antibodies against glucosaminidase, a subunit of the bacterial protein autolysin, which is crucial to its replication process. They announced their findings in an abstract presented at a meeting of the Orthopaedic Research Society in Long Beach, California, US.

The researchers developed their antibodies from immune cells isolated in mice injected with glucosaminidase, selecting some of these to make ’hybridoma’ cells capable of producing antibodies against the protein. Schwarz’s team eventually narrowed down its candidates to just four antibodies, showing they slowed the growth of MRSA in a test tube. Under the electron microscope, they confirmed that bacteria cultured with one of these antibodies were unable to divide. 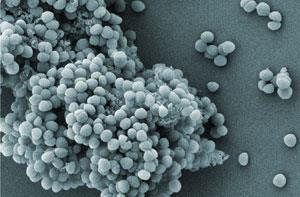 Scanning electron micrograph of S. aureus growing in the presence of anti- glucosaminidase antibody vaccine, which clumps the bacteria together, prevents cell division and kills some of the bacteria

According to Schwarz, these studies bring them closer to a MRSA vaccine than ever before because they use mouse antibodies of one specific type - monoclonal antibodies or mAbs. ’Others have evaluated experimental passive immunisation with rabbit polyclonal antibodies, which cannot be used in humans,’ he says.

But the Rochester team is already one step ahead - early results from a trial in mice are due to be announced as this article publishes. They show ’passive immunisation is protective’, Schwarz says. Phase I human trials are scheduled for 2012.