US chemists have synthesised a fiendishly complex plant extract compound thought to possess promising anti-cancer activity, only to find it doesn’t kill cancer cells at all.1

Phil Baran’s team at the Scripps Research Institute in San Diego, US, trimmed the number of steps needed to make (–)-maoecrystal V, originally isolated from the Chinese medicinal herb Isodon eriocalyx in 2004, to 11.2 And by preparing over 80mg – an abundance compared with previous synthetic efforts – Baran’s collaborators could screen it in laboratory tests against 32 different cancer cell lines. The results were disappointing however, showing little to no anti-cancer activity, suggesting the ‘originally exciting findings’ were due to impurities or flawed screening assays. 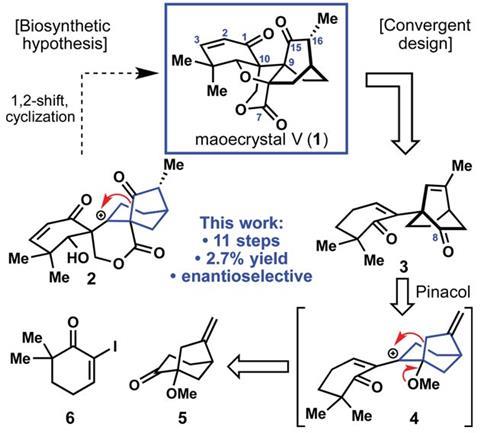 Regan Thomson from Northwestern University in Evanston, US, whose team’s 18-step (–)-maoecrystal V route was previously the shortest3, had a similar experience. ‘In unpublished work after our synthesis we also observed the same outcome, so I am very glad they reported their findings,’ Thomson says.

‘We need to hold the natural product isolation community to a higher standard for reproducibility and data reporting,’ Baran tells Chemistry World. ‘I don’t think synthesis people wasted their time making this molecule at all, but if the effort could have been expended on a structure that actually had real biological activity it might have done an even greater good for humanity.’

Whereas other routes produced the interlocked rings through Diels–Alder chemistry, Baran’s group pursued a different strategy. Their 11-step synthesis mimicked the way the molecule is thought to be produced biologically, arranging the neighbouring quaternary stereocentres in sequential steps. It took team members Artiom Cernijenko and Rune Risgaard around 1000 experiments to find appropriate conditions to form one stereocentre.  Their final conditions called for a lanthanide Lewis acid, the first time one has been used in an aldol reaction with an extended enolate. Baran doesn’t think that such labours are uncommon in synthesis though. ‘Perhaps it’s just unusual to be so transparent,’ he adds.

Thomson calls the Scripps’ strategy ‘clever’ and the work to develop the specific reaction conditions needed to pursue it ‘impressive’. ‘Compounds like maoecrystal V often defy standard reactions,’ he says. ‘What looks reasonable on paper is often much more difficult in practice. One learns to expect the unexpected.’