Researchers from China and France believe they have uncovered the molecular mechanism by which arsenic trioxide kills certain cancer cells. Arsenic is a poisonous metalloid that has been used in Chinese medicine for centuries to treat illnesses such as psoriasis and syphilis. More recently it has been shown to be effective against acute promyelocytic leukaemia (APL), a cancer of the blood. 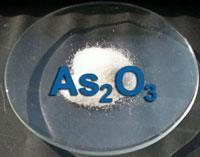 Arsenic trioxide has been used in medicine for centuries, but only now are the mysteries of how it kills cancer being solved

However, the role that arsenic plays in the sequence of reactions leading to the death of the cancer cells has not been clear. Now, Xiao-Wei Zhang, from the Shanghai Institute of Hematology, and colleagues believe they have pinpointed the key target of the arsenic compound, although a detailed mechanism of action has still to be established.

which is vital to the survival of the cancer cells. Arsenic trioxide triggers a cellular protein called SUMO to ’tag’ the fusion protein, earmarking it for destruction. The destruction of the protein leads to the death of the cancer cell, but until now, how As2O3 achieves this had remained a mystery.

The new research has shown that when As2O3 is added to cell extracts containing the fusion protein, the protein becomes insoluble and that the arsenic is associated with the insoluble fraction. The team then isolated a particular region of the PML protein called a zinc finger and showed that arsenic binds to this region, which is rich in cysteine residues. The researchers say that the binding of arsenic to this region causes several protein molecules to join together as an oligomer through cross-linking and conformational changes. The altered protein is then bound by SUMO, resulting in the protein aggregate’s subsequent degradation. Team member Xiao-Jing Yan believes that knowing the target protein of the arsenic could allow better treatments to be devised in tandem with other drugs that also hit the same protein.

’These exciting observations suggest that arsenic may be acting directly on the PML-RAR fusion protein to enhance its SUMO modification and thus provide the trigger for its destruction,’ says Ron Hay of the University of Dundee in the UK, who has studied the role of SUMO in arsenic-induced degradation of PML.

’However the precise mechanism that allows arsenic to substitute for the zinc already bound to PML and how this brings about increased SUMO modification remains to be determined,’ Hay continues. ’Clearly this will be a hot topic for future research and may reveal how arsenic, which binds to many proteins, has this remarkably specific activity on PML-RAR.’