Drug labelled with radioactive arsenic could spot even the smallest tumours

Locating tumours with pin-point accuracy could soon be possible with a new therapy that uses radioactive arsenic. For the first time, this famously poisonous element has been used to label antibodies that seek out and bind to cancerous cells, allowing tumours to be detected on PET scanners.

The technique uses doses of arsenic that are millions of times below toxic levels and no more radioactive than conventional imaging agents.

’What is unusual about our images is that they are extremely clean,’ says Philip Thorpe, leader of the team at the University of Texas Southwestern Medical School, US. ’We hope that this will allow us to detect early tumours or metastases that are not visible with other imaging techniques.’ 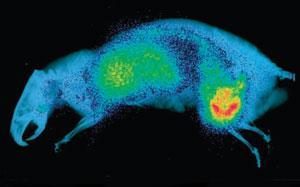 PET scan of a rat with tumours imaged with the new technique. An x-ray image of the rat is overlaid on the scan

The team has so far used the technique to successfully image tumours in rats. The therapy uses arsenic-74, a radioactive isotope that is one of a small number of positron emitters with a half-life suitable for medical imaging. When arsenic-74 decays, a positron (the antimatter equivalent of an electron) is produced that instantly annihilates with a nearby electron, releasing tell-tale gamma rays that give away its location.

The team combined arsenic-74 with bavituximab, an antibody that binds strongly to unique lipids found on the surface of tumours. ’Arsenic’s chemistry is very agreeable for antibody attachment,’ explains Thorpe. ’We introduced a thiol group into bavituximab so that arsenic can bond covalently. This produces a radio-labelled antibody that is extremely stable.’

The bavituximab antibody labelled with arsenic

This stability is the key to achieving clean scans, says Thorpe. For example, iodine-124, a commonly used positron emitter, is susceptible to dehalogenation. This causes images to contain a lot of ’noise’ as iodine-124 is moved to other parts of the body, in particular the thyroid, which reduces the accuracy of the scan.

If this technology successfully passes clinical trials, the team believe that the same antibody-binding technique could be used to deliver arsenic-77 to tumours instead. This heavier isotope emits beta radiation which would destroy the tumour, perhaps providing a highly selective treatment for a wide range of cancers.

Michael Welch, an expert in radiopharmaceuticals at Washington University in St. Louis, is impressed by the results. ’The team have shown some of the highest selectivity for tumours achieved with antibodies,’ he told Chemistry World.’ This could be very important if they can translate it to the clinic.’

But Welch warns that, since the isotopes are all made in cyclotrons or nuclear reactors, finding sources could be a barrier to implementing the technique.