London-based artist and chemistry aficionado Aoife van Linden Tol will relocate to facilities in a remote forest area south of Berlin this June to create her newest collection of ’explosive art’, detonating small bombs to make imprints on paper, wood and metals.

The artist says she is turning bombs from a destructive tool into a force capable of creating beauty, and notes that traditional artistic tools can also be transformed. ’I could kill someone with a pencil if I wanted to,’ she adds.

van Linden Tol will make her new series at the safety test site for Germany’s Federal Institute for Materials Research and Testing (BAM), using the facility normally used to test fireworks and other explosives as well as chemical systems. She says she plans to place stencilled sheets of bamboo and mulberry paper on the site’s test stand, and then set off explosions above the sheets using black powder, detonating caps or plastic explosives. ’I may also use sheet copper and sheet aluminium,’ she says, but adds that once she begins work, anything can happen. ’My whole working process from start to finish is a series of test and experiments.’

Her results will be exhibited later this year at the allgirls international art gallery in Berlin in a show called ’Blowing My Dreams Away’.

Ireland-born van Linden Tol says the inspiration for explosive art came from a chance meeting in 1999 with a nerdy-looking chemistry student. ’He looked really square,’ she says. ’I thought he would be really boring and then he told me he used to make homemade bombs when he was a teenager and blow up things. I thought it would be cool to use explosives of some kind to make art.’ 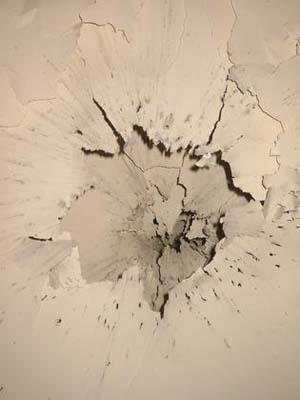 In 2001, van Linden Tol completed an explosives course at the UK’s International School for Security and Explosives Education, and she made her first artworks on the firing ranges of Salisbury Plain, operated by the UK Ministry of Defence. After exhibiting ’Explosions on Paper’ in 2006 in L?beck, Germany, she came to the attention of BAM,  according to BAM spokesperson Ulrike Rockland, who until 2006 was a physical chemist in the institute’s chemical safety engineering lab.

BAM allowed van Linden Tol to use the test site in 2007 to create art objects from newspapers, books, and other paper objects. The results are among the items being exhibited until March 22 at the Brandenburg Art Association in Potsdam, Germany, as part of an ’Art + Science’ project.

Rockland says that BAM has also contributed four artworks to the exhibit. All four started as flat 40-cm copper plates, but three were subjected to test explosions within BAM’s 50 litre, four tonne spherical autoclave, unique in Europe and used for studying reactions of gases under high pressures up to 1,100 bar.

The copper plates were used in a series of tests to determine the explosive behaviour of the liquid solvent toluene and pure oxygen at various pressures. Oxygen pressures varied between 8.5 and 21 bar set off explosions that transformed the plates into oyster-shell-like shapes of ’fascinating beauty’, says Rockland.

Rockland says she sees Van Linden Tol’s objects produced in 2007 at the test site as true art. ’It’s great,’ she says, adding that the blasts leave shock wave impressions on paper. ’It is interesting to see things that you normally can’t see.’

Rockland believes that scientists can benefit from artistic interpretation of their work, noting that one BAM scientist after viewing the exhibit told her that ’he now sees his work with new eyes.’