Three-dimensional (3D) hydrogel scaffolds for studying cells under realistic physiological conditions have been made by scientists from the US and Korea to study drug absorption in the gut. 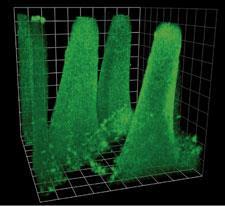 A confocal microscope image of the collagen scaffold

Compared to traditional 2D cell cultures, culturing cells in 3D spaces provides a more realistic environment for the cells, making it similar to in vivo studies. Traditional fabrication methods for 3D hydrogels enable size control but are limited by the shapes they can produce - mainly confined to rectangles.

Now, a team led by John March from Cornell University has developed a method that allows the fabrication of more complex shapes, like the ones commonly found in nature, and have created replicas of gastrointestinal villi on which to grow cells.

They used laser ablation to create a plastic mould made from polydimethylsulfoxane that, after further steps, yielded a sacrificial hydrogel mould made from calcium alginate. The sacrificial mould was used to build a collagen scaffold and dissolved under physiological conditions, yielding the final hydrogel structure with the desired shape.

To demonstrate its ability to act as a scaffold for cells, the team seeded human colon carcinoma cells on the hydrogel structure. These cells are used to study gastrointestinal epithelial cell lining in drug absorption studies. They took an image of the cell-covered structure with a scanning electron microscope and compared it to an image of human villi and found that they were similar.

’Our interest is in making culture models of the upper intestine for research,’ explains March. ’I think we’ll eventually be able to understand the 3D physical environment of the gastrointestinal tract and other parts of the body much more effectively than we do now.’

’There is great interest in reconstructing biological subsystems within in vitro devices, connecting the language of biology in the former to the electrical, mechanical and optical signals of the latter,’ says William Bentley, an expert in bioengineering at the University of Maryland, US. ’March and colleagues have created a 3D cell culture environment that will eventually report on the complex processes at the interface between the intestine and the human microbiome [microbes in the gut],’ he adds.

’I hope that we can someday replace the live animal models that are in current use as they can be inaccurate and costly,’ says March.