Artificial leaf in the shade but still growing 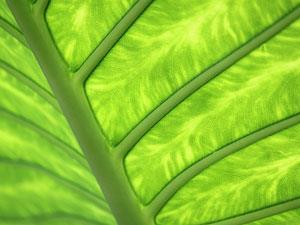 Can chemists create a cheap artificial leaf that is more efficient than its natural counterpart?

The artificial leaf unveiled by Dan Nocera, now of Harvard University, US, in 2011 captured the public’s imagination. But are efforts to take this technology to market stalling? Sun Catalytix, the spin-out founded to commercialise the technology, has paused its development in favour of quicker financial wins and it’s now difficult to predict the path to market of any kind of synthetic photosynthetic device.

Nocera’s leaf consisted of a silicon wafer coated on each side with a different catalyst – one for water oxidation and one for reducing protons into hydrogen gas. Sunlight provided the energy to drive the reaction, creating a simple, if inefficient, system for creating a solar fuel.

Nocera set up Sun Catalytix in 2009 and the firm is now backed by Indian multinational Tata Group. However, the venture capital agreement signed earlier in the company’s existence required a return within the next two years. Research in Nocera’s lab continues but Sun Catalytix has had to abandon the artificial leaf concept. The company is now looking to transfer the technology to nanoparticles that can be suspended in water but at present is focusing on grid energy storage in an attempt to return its venture capital investment.

‘Dan’s a great story teller,’ laughs Mike Lyons of Trinity College Dublin in Ireland. ‘But that has its inherent dangers.’ By which he means that there is always the danger of getting ahead of the science. Having started work on these systems back in 1979, Lyons describes himself as a little more prudent. ‘It’s gone round full circle and now I’m revisiting systems I published back in the 1980s.’

As crude oil prices rise again and easily accessible reserves continue to dwindle, research is once again focusing on converting solar energy into fuels. However, little has been commercialised. While we know a lot more this time around, adds Lyons, the problems are still there. Rushing a product to commercialisation before it’s ready, he warns, ‘can queer the pitch for an entire field’. 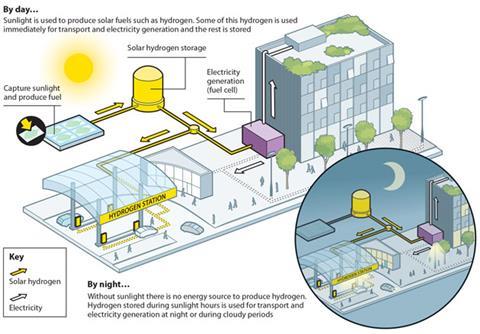 ‘Water splitting is one of the grand challenges for chemistry and interest in solar to fuels and artificial photosynthesis is still growing very strongly,’ says James Durrant, who works in this area at Imperial College London, UK. ‘However, a commercially viable water splitting device is still likely to be several years away.’

One of the biggest obstacles for the commercialisation of water splitting is the challenge of making it cost effective. With natural gas prices dropping as alternative extraction methods such as fracking increase supply, the cost of hydrogen from methane has dropped to $1–2 (£0.65–1.30) per kilogram. Any new technology will need to at least match that.

The lack of hydrogen infrastructure and allied technologies are also obstacles to more widespread adoption of hydrogen as a fuel and that affects the attractiveness of pursuing water splitting technologies. However, for those focusing on solar to fuel research, there is little alternative.

To try and reduce the cost of his leaf Nocera is working on reducing the amount of silicon used and is also looking to scale-up production by moving to roll-to-roll printing. To achieve this Nocera’s lab is working with Roy Gordon’s group, also at Harvard, on using chemical vapour deposition to coat flexible silicon with his catalysts, or even depositing the semiconductor as well.

All those working in the area agree, creating oxygen evolving catalysts that are both efficient and low cost is a significant hurdle to reducing the cost of artificial photosynthesis.

The problem is the forming of the oxygen molecule, explains Simon Trudel of the University of Calgary, Canada, who recently helped to develop a new way of creating oxygen evolving catalysts. ‘When you look at what needs to happen to form an oxygen molecule, you really need to manage multiple bond breaking and making and electron transfer steps.’

‘Dan Nocera paved the way to show that amorphous earth abundant metals could be used for oxygen evolution,’ says Trudel. ‘We were interested in giving it a try and iron is one that I noticed hadn’t been done.’ Another problem in the field, adds Trudel, is the methods used to make the oxygen evolution catalysts – electrodeposition from solution. ‘This is not a process that has proven easy to incorporate different components into a catalyst,’ he says.

Nature gives us some design principles, but how you put the pieces together is crucial

The literature shows that mixed metal oxides are often superior catalysts. It was this that led the Canadian team to use photochemical metal organic deposition, allowing the group to start creating a large variety of combinations. What they’ve published so far, says Trudel, is just the tip of the iceberg, ‘we’re interested in what’s below the water’.

Trudel is now spinning out this work. However, the catalysts won’t be made into the kind of artificial leaf envisaged by Nocera. For one thing, amorphous materials aren’t good conductors, something required for photocatalysis. Instead, the Canadian group are targeting the existing electrolyser market, where electricity that has been generated is then fed into a water splitting device. ‘The photochemical aspect is still down the road,’ Trudel adds.

Lyons agrees, adding that for him ‘the real story is the oxygen evolution reaction itself, because that has far more applications than just an artificial photosynthetic system, however sexy that looks’.

Not that artificial photosynthesis isn’t still being pursued both for hydrogen and feedstock chemical production. Durrant is part of an artificial leaf project at Imperial and the US and Dutch governments have invested large sums of money in solar research. But at the moment, the parts of the puzzle still don’t fit together.

‘Nature gives us some design principles, but how you put the pieces together is crucial,’ says Nate Lewis who heads up the Joint Centre for Artificial Photosynthesis in California, US. Lewis likens the centre, which is a Department of Energy funded Energy Innovation Hub, to a factory for making aeroplanes. ‘It’s not enough to have an engine, because the engine might be too heavy so the airplane can’t fly.’

Right now, it’s not clear which path will eventually lead to renewable fuels from solar energy. To continue his airplane analogy Lewis compares artificial photosynthesis at the moment to the Wright brother’s first flights. ‘We’re just getting off the ground, we’re not flying 747s yet.’