'Artificial leaf' under the microscope 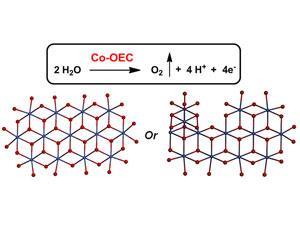 Since Daniel Nocera at Massachusetts Institute of Technology in the US discovered a cobalt catalyst capable of splitting water, researchers have been trying to discover more about its structure and how it works. Now researchers in the US and Italy have used new techniques to gain a better insight into the structure and mechanism of these type of catalysts1 and hope that their research might lead to further improvements in the field.

Catalysts that use light to split water into oxygen and water are key to finding clean ways to store energy. So, in 2008, when Nocera reported a new cobalt oxide and phosphate catalyst that could split water, it caused quite a stir. The catalyst not only made use of an abundant first row transition metal, it worked at neutral pH and room temperature, opening up a cheap technology for solar energy conversion.

But since this report, the structure of Nocera’s catalyst has remained a mystery. The catalyst in question is a thin, solid film that forms on the surface of the electrodes and researchers have used techniques such as scanning electron microscopy and x-ray absorption fine structure spectroscopy (XAFS) to probe its structure. However, while researchers determined an octahedral geometry around the cobalt centres, they were only able to guess at the longer range structure – postulating both extended sheet and smaller cubane models.‘The question is what does the geometry look like, what does the structure look like?’ says Heinz Frei, an expert in artificial photosynthesis at Lawrence Berkeley National Laboratory, US.

Researchers at the Argonne National Laboratory, US, may have found the answer. David Tiede and colleagues used high energy x-ray scattering to allow them to see beyond the immediate vicinity of the metal ions revealed by XAFS. Analysis of the scattering patterns, which gave information from angstroms to nanometres, showed that the catalyst is made up of small molecular complexes, each containing 13 to 14 cobalt atoms. According to Tiede these domains are composed of edge-sharing octahedra, with edge defects providing potential sites for catalytic activity.

Frei says that Tiede has given researchers vital information about the structure of the catalyst. ‘What’s important is that [he] can see long range correlations,’ adds Vincent Artero, an expert in the field at CEA-Grenoble, France. ‘It is now clear that it is not a purely crystalline structure with a long range order, it’s small isolated clusters.’

The researchers hope that by determining the structure of the material, they can understand and ultimately improve its catalytic activity. ‘We now have an avenue open to probe more deeply into the structure of the catalyst – why it forms, why phosphate does what it does and how the reaction works,’ says Tiede. He now plans to investigate the material during catalysis, as well as probing the role of phosphate in the reaction.

While Tiede has given researchers a clearer view of the solid structure of Nocera’s catalyst, a number of researchers are looking at the material at the molecular level. Molecular models can allow researchers to use a wider array of spectroscopic methods to study the catalyst’s action, giving a better insight into how it works.

In a second paper, a collaboration of Italian scientists investigated a cobalt cubane structure to determine if they could improve its catalytic activity by changing its substituents.2 Their research showed that by adding methoxy substituents onto the pyridine ligands, they were able to greatly improve its reactivity, both in terms of its light induced electron transfer and its ability to generate oxygen.

‘The key finding is that the [substituent] which has the fastest communication with light also has the highest production of oxygen,’ says lead researcher Marcella Bonchio, at the University of Padova, Italy. ‘We are now working on the mechanistic details so to have some clues about all the other steps that are involved in the mechanism.’

Frei says that this is a very valuable piece of work which adds to the knowledge about how cobalt oxide cubane structures work. ‘But in the end the molecules themselves – although they may be efficient on a lab timescale may not be viable ultimately because of the robustness,’ he says.