Artificial skin with a sense of touch could be on the horizon for robots or prosthetic hands thanks to new research into flexible, pressure sensitive surfaces

New ways of incorporating pressure sensors into large, flexible surfaces which could one day provide robots or people fitted with artificial hands with a delicate sense of touch, have been developed by three independent teams of US researchers.

Sensitive and rapid detection of pressure has long been a goal for researchers working with robotics and, in the more distant future, for prosthetic hands where a touch-sensitive mechanical skin would be integrated into the wearer’s nervous system.

At Stanford University, California, Zhenan Bao’s team has developed what is in effect a flexible, pressure sensitive capacitor.1 It consists of the highly elastic polymer polydimethylsiloxane (PDMS) sandwiched between flexible electrodes incorporating organic semiconductor transistors. The polymer is moulded so that its base consists of multiple, micrometre-scale pillars. As pressure is applied on the surface of the construct, the polymer pillars are compressed, reducing the distance between the electrodes and altering the capacitance of the system, whose position and magnitude is detectable by the semiconductors. 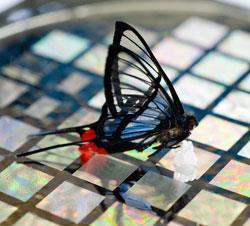 ’Using this system we can easily fabricate arrayed structures with pressure sensing capability over a large area,’ says Bao.

Meanwhile in a different department at the same university, Giulia Lanzara and her colleagues have focused on the problem of creating precision microcircuitry over a large area.2 Micro- or even nanoscale electronics can be fabricated relatively simply in a small area through techniques such as photolithography. Scaling this up, however, requires components to be manually positioned, which is costly and logistically tricky.

Lanzara’s team has found a way of making a compacted, parcelled up small circuit and effectively unfolding it into a large circuit of predetermined geometry. To demonstrate the approach, the researchers used conventional microcircuitry methods to deposit platinum spots on a thin film of the flexible polymer polyimide. These spots are then connected by thin gold wires. But instead of being laid down in a straight line, the wires are looped back and forth resembling a folded ribbon. Multiple spots - nodes - and wires can be patterned in this way.

’We then use an etching mask and remove all the excess polymer substrate from surface, leaving only the wires and nodes,’ says Lanzara. The circuit can now be expanded - with the folded wires able to simply extend like a concertina to up to 16 times their original length.

’We can fabricate the initial circuit so that it can be extended to form the final shape of circuit we require, in two or three dimensions and with different densities of component on the circuit, so that on an artificial hand, for example we could have a greater density of sensor nodes at the fingertips,’ says Lanzara.

At the University of California at Berkeley, Ali Javey’s group have exploited the inherent flexibility of inorganic germanium-silicon nanowires to create a pressure-sensitive surface.3 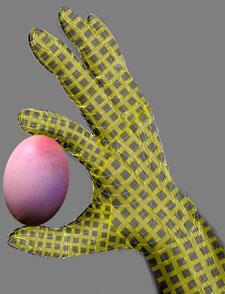 The team printed the nanowires onto a 7cm2 matrix containing nearly 350 pixels. Each pixel contained a transistor consisting of hundreds of the semiconductor nanowires. A silicone-based pressure-sensitive rubber was integrated with the circuit. The rubber’s electrical resistance changes when pressure is applied to it, and this is detected by the semiconductor array.

’This is the first truly macroscale integration of ordered nanowire materials for a functional system - in this case, an electronic skin,’ says team member Kuniharu Takei. ’It’s a technique that can be potentially scaled up. The limit now to the size of the e-skin we developed is the size of the processing tools we are using.’

Fredrik Sebelius, of Lund University in Sweden, is interested in the development of technologies relating to an artificial hand. Commenting on the new research, Sebelius says that while the underlying technologies used in all three cases have been around for some time ’these are new sensors that probably work better and in some case can be made really low cost’.