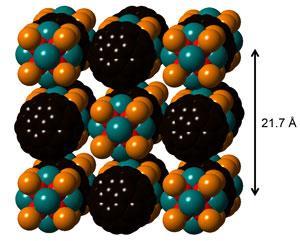 Could a new periodic table be on the horizon, populated not by conventional elements but by new ‘superatoms’ designed in the lab? This is the intriguing implication of new work by US chemists, who have made structural analogues of simple ionic compounds such as sodium chloride and cadmium iodide by interacting large molecular clusters instead of individual atoms.

The new compounds have unexpected electronic and magnetic properties, opening the prospect for the design of bespoke solid state materials whose properties can be tuned by the selection of the constituent superatoms.

The research team, led by Colin Nuckolls and Michael Steigerwald at Columbia University in New York, wondered what would happen if electron-rich molecular clusters were introduced to similarly sized electron-poor clusters. They mixed the metal chalcogenide Co6Se8(PEt3)6 with C60 clusters – also known as buckyballs – in toluene. ‘The result was pretty spectacular,’ says Steigerwald. ‘When we came back there were enormous black crystals. I was convinced it was the C60 recrystallising.’ But x-ray diffraction studies showed that the crystals consisted of one chalcogenide combined with two C60 clusters in a geometry analogous to cadmium iodide. Raman spectroscopy showed that charge had been transferred between the two components, effectively forming an ionic solid, with similar structural ordering to its conventional counterpart.

‘Once we had one structure it was obvious to start mixing other clusters together,’ says Nuckolls. They tried Cr6Te8(PEt3)6 with buckyballs and obtained a crystal with a similar CdI2 architecture. The third electron-rich cluster the team mixed with C60 was Ni9Te6(PEt3)8. ‘Here the crystals were quite small and looked like tiny cubes,’ says Nuckolls. And indeed the two superatomic components had combined in a 1:1 ratio and the crystal lattice resembled that of rock salt, NaCl.

Each of the three materials were electrically conductive, and the third material, made with the nickel-based superatom, had magnetic characteristics that were present in neither of its two constituent superatoms.

The researchers are convinced that the opportunities for such new superatomic combinations are almost limitless. ‘We think this isn’t even the tip of the iceberg – it is the ice cube on the tip of the iceberg,’ says Nuckolls. Steigerwald adds, ‘This could become the third dimension of the two-dimensional periodic table.’

The team is seeking new super-atomic materials and, says Nuckolls, ‘already has a few in our back pocket’.

Commenting on the work, Christopher Murray of the University of Pennsylvania, US, who researches nanocrystalline systems, says: ‘This is a really elegant piece of work, and it represents significant step forward in the design of cluster-assembled materials.’ Murray notes that while the use of molecular clusters as nanoscale surrogates for atomic building blocks has excited many researchers, ‘producing single crystals with clearly delocalised electronic structure is really extraordinary. The properties of these “nanoscale atoms” could be widely tuned by synthetic methods and the resulting opportunities to engineer new crystalline materials with tailored optical, electrical and magnetic properties are extensive.’

Murray adds: ‘This work provides a powerful example that the building blocks of solid state chemistry are not longer limited to nature’s periodic table, as tailored molecular clusters can serve as “artificial atoms” in a greatly expanded building set.