A mild and effective method for coupling trifluoromethyl groups on to aryl rings has been developed by US chemists. With increasing use of fluorine in drug molecules, the process should be especially useful in medicinal chemistry and agrochemical development.

Fluorination of organic molecules can have drastic effects on their properties, changing their solubility and polarity, and in the case of drug molecules, how well they are absorbed into the body and how resistant they are to metabolism. However, as Stephen Buchwald from the Massachusetts Institute of Technology in Boston, explains, reliable methods to add fluorine - particularly CF3 groups - to aromatic rings are lacking from the synthetic chemist’s toolkit.

Buchwald’s team has developed a catalytic system that can substitute aryl chlorides for CF3 groups. The catalyst is based around palladium and one of the group’s trademark biaryl phosphine ligands - BrettPhos - along with trifluoromethyl triethylsilane (Et3Si-CF3) and potassium fluoride. Using aryl chlorides rather than bromides, iodides or triflates drastically expands the scope of the method, says Buchwald, because there is a much wider range available. 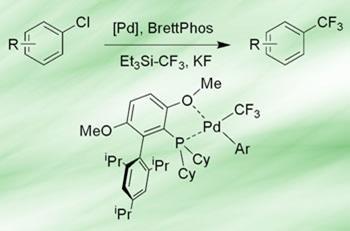 A palladium catalysed procedure uses one of the Buchwald group’s ligands, BrettPhos, to add CF3 groups to aryl rings

There are three key steps in a successful cross-coupling reaction: oxidative addition of the metal into the C-Cl bond; transfer of the other coupling partner (CF3 in this case) onto the complex; and reductive elimination to bring the two partners together and release the metal to catalyse another reaction.

Buchwald explains that although the reductive elimination step was tricky, the biggest problem in this case was getting the CF3 group to transfer successfully to palladium under conditions where the other steps would also work. ’Lots of people have made huge contributions to working out the individual steps of the cycle, and developing transfer agents,’ he adds. ’Part of the key to our success is the set of ligands we’ve developed that give catalysts desirable properties, particularly inducing reductive elimination.’

Melanie Sanford, a palladium catalysis expert from the University of Michigan in Ann Arbor, US, praised the work, calling it ’a spectacular advance’ and reiterating its potential usefulness to medicinal chemists. ’Buchwald’s new ligands are really amazing,’ she adds, ’and they have allowed him to do reactions like this that have been pursued unsuccessfully for over 20 years.’

While Buchwald is sure that the method as it stands will be useful for drug discovery, he admits that it is still too expensive for manufacturing molecules on a large scale. ’We want people to be able to use the chemistry,’ he adds, ’so we’re working on understanding the mechanism better and tweaking it to make it more practical.’