The Australian government has shelved plans for an emissions trading scheme (ETS) until at least 2013, blaming the opposition’s determination to block the legislation and slow international progress on a new climate change deal.

The ETS is one of the government’s key policy initiatives and was designed to enable Australia to meet its target of reducing greenhouse gas emissions by 5-25 per cent on 2000 levels by 2020.

Prime Minister Kevin Rudd has said he is still committed to the emission reduction targets, but the government has admitted that delaying the ETS will make achieving them more expensive.

The proposed ETS has already been rejected by the Senate and was facing rejection again this year. 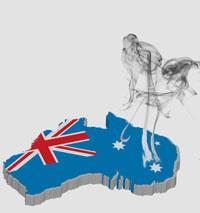 The government will now wait until at least the end of 2012, when the Kyoto protocol expires, before deciding what to do. ’It’s very plain that the correct course is to extend the implementation date and to assess the action by other states at the end of 2012,’ said Rudd.

Rudd is facing criticism for backing down from tackling climate change, and the delay has been met with anger and disappointment from businesses, environmentalists and scientists.

’To put comprehensive climate action in the too-hard basket until 2013 would be bad for the environment, destabilising for business and totally unacceptable to the millions of Australians who want government leadership on climate change,’ said Australian Conservation Foundation director Don Henry.

There is also concern that the delay sends the wrong message to other countries. ’Why would any rapidly emerging country want to do anything given that Australia doesn’t want to start?’ said Ben McNeil, senior fellow at the climate change research centre, University of New South Wales, Australia.

’From a scientific point of view it is very disappointing,’ he says. ’We know that the world needs to cut emissions rapidly over the coming decade and if Australia, with all its resources and wealth, can’t get its act together then I don’t have much hope for the world getting together and doing something.’

The uncertainty also risks delaying investment in gas-fired power stations and low-carbon technologies. ’The government is going to have to provide a huge incentive to get these projects happening,’ said McNeil.

Ian Lowe, president of the Australian Conservation Foundation, said introducing a carbon tax in the budget on 11 May with an undertaking to increase it each year until an ETS is legislated would give business some confidence to invest as well as providing a price signal to drive change.

Rudd has said the government will speed up implementation of its renewable energy plan but has not yet released any details.