Ian Chubb calls on the government to set out a long-term plan for research, but there are doubts the plea will be heard 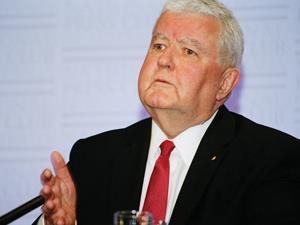 Australia’s chief scientist Ian Chubb has presented an ambitious agenda to the government to bolster the nation’s science base. He also took this opportunity to warn that Australia is not keeping pace with advances seen in other nations around the world and risks being left behind.

In his report, Chubb said that Australia’s national interests are at risk unless science is improved ‘through strategic investment, good planning and long-term commitment’. His recommendations stress the economic benefits for Australia of robust and innovative science.

‘Science is infrastructure and it is critical to our future,’ Chubb said, adding: ‘We are the only OECD [Organisation for Economic Co-operation and Development] country without a science or technology strategy. Other countries have realised that such an approach is essential to remaining competitive in a world reliant on science and science-trained people.’

The report, publicly released on 2 September, has been widely praised in Australia’s science and education community. ‘The general thrust of Chubb’s doctrine is to be applauded,’ says George Koutsantonis, professor of chemistry at the University of Western Australia and board member of the Royal Australian Chemical Institute.

Anthony Baker, head of the school of chemistry and forensic sciences at the University of Technology in Sydney, adds: ‘Ian Chubb is a very inspirational leader and we, as the STEM community, are lucky to have him as our advocate.’

To make the country more competitive urges the government to set up an Australian Innovation Board, similar to the Small Business Innovation Research programme in the US and the Technology Strategy Board in the UK. For education and training, he recommends ensuring each primary school has at least one teacher specialising in STEM and increasing the number and the quality of STEM teachers at the secondary level through better pay and career advancement.

Chubb also suggests that the government adopt a long-term plan for science that covers the direct and indirect costs of research, investment in infrastructure and fosters collaboration with industry and business. He recommends establishing a fund to support ‘strong government-to-government linkages’ too, which would build on existing partnerships to create an Asian research zone, while also deepening STEM relationships with the EU and the US.

Baker sees Chubb’s recommendations for improving science teaching at all levels as a key component of the report. ‘I agree wholeheartedly with this and recognise that current teaching is not inspired or inspiring,’ says Baker. ‘There is something of a crisis in science teaching in this country.’ He says chemistry in secondary schools is often is taught by biology-trained teachers.

Koutsantonis says that Chubb’s recommendations, if realised, would have ‘a far-reaching impact’ on chemistry in Australia. ‘The teaching of chemistry at secondary level needs to be undertaken by chemistry specialists and they should inculcate the joy and excitement of chemistry to students,’ he says. ‘Chemistry impacts on all elements of society and the good that it does needs to be recognised by the general public and that needs to start with young minds. It is vital to rejuvenate schools and to capture hearts and minds through inspirational chemistry teachers.’

Some scientists and educators are doubtful, though, that Chubb’s agenda will be embraced by Prime Minister Tony Abbott, who is perceived by some as being indifferent toward science. After assuming office in September 2013, Abbott abolished the science ministry and moved its portfolio to the industry ministry. He also cut more than A$115 million (£66 million) from the budget of the Commonwealth Scientific and Industrial Research Organisation (CSIRO), the nation’s premier national science agency, resulting in hundreds of job losses and the closure of eight research facilities.

Chubb, writing an opinion piece in the Sydney Morning Herald, appeared to make a reference to the current political climate in Australia by referencing the former US President Ronald Reagan and the current UK government. Chubb wrote: ‘Let’s not forget that the largest funder of venture capital in the world is the government of the United States – through measures established by Ronald Reagan. The economy singled out this year by the IMF for its strong growth prospects was the United Kingdom – which ring-fenced science investment amidst an austerity drive.’

However, Baker says: ‘I don’t think STEM is on their radar at all. I cannot see a major investment – in fact, the very opposite is more likely. The government seems to be taking funds away from universities, research bodies and CSIRO.’

‘In my opinion,’ Koutsantonis says, ‘the government’s attention span does not go beyond the electoral cycle, so the bigger picture in research, apart from vote-winning medical research, is ignored.’ Referring to the Chubb agenda, he says: ‘Will they take action? Probably not.’